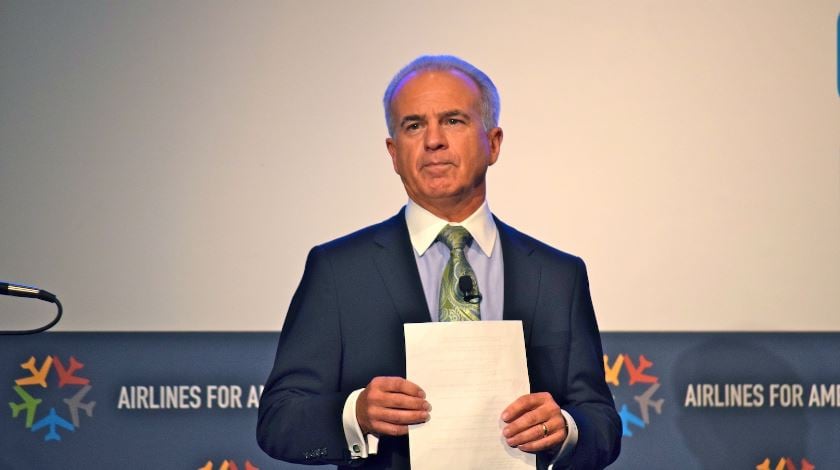 Airlines for America (A4A) president and CEO Nicholas Calio slammed proposals circulating in the US Congress that he said “look a lot like pre-1978” regulation of the US airline industry.

During a luncheon address at the US Chamber of Commerce Aviation Summit in Washington DC, Calio reiterated his strong criticism of the Senate’s proposed FAA reauthorization bill and other airline customer-service proposals in Congress, such as one to regulate seat size on commercial aircraft. He called the proposed consumer-protection measures a “wolf in sheep’s clothing” that “will make flying more expensive and reduce service, especially to small- and medium-sized markets.”

Calio added, “Members of Congress, with all due respect, if you to want to run an airline, buy some aircraft—and good luck getting slots at [Washington] National Airport.”

Senate Commerce, Science and Transportation Committee chairman John Thune (R-South Dakota) and ranking Democrat Bill Nelson (D-Florida), who are backing a proposed FAA reauthorization bill that appears to have wide bipartisan support, “took the easy way out” by neglecting “real governance or funding reform” for FAA, Calio asserted. Instead, he said, the proposed Senate bill seeks to dictate airline management decision-making despite the fact that “this industry is working in a way it has never worked before” and US airlines are investing heavily in their products.

Calio noted that US airlines hired 10,000 new workers last year and an average of one new aircraft has been added to the US airline fleet daily since the beginning of 2015. He sharply criticized a provision in the Senate bill mandating that the US Department of Transportation (DOT) reviews what constitutes a weather delay or cancellation in order to promulgate a rule requiring airlines to provide “refunds or other considerations” to passengers affected by “delays or cancellations when an air carrier has a choice as to which flights to cancel or delay during a weather event.”

If the Senate bill were to become law, “the government would determine which flights would be cancelled,” Calio said.

He also said lawmakers should back away from another proposal—not in the Senate bill now, but expected to be attempted to be added—to regulate seat size on commercial aircraft. While the seat-size proposal may not initially sound too onerous to the average consumer, Calio said airline passengers should be asked, “Would you still like the government to tell you what your seat size should be if you have to pay more for your ticket?”

Calio said he found such airline consumer-oriented proposals by lawmakers “bizarre” given that, according to DOT statistics, “only two out of every 100,000 passengers files a complaint.”