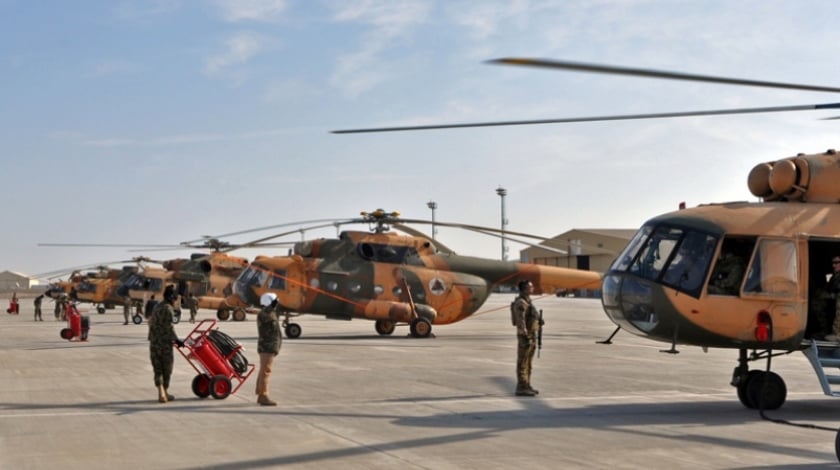 The Afghan air force is limited not only by its size. Despite numbering only 130 aircraft, there are not enough pilots and crews to fly them all.

The shortage is hampering Afghan security forces’ ability to fight Taliban terrorists, who are once again gaining territory in the north and south of the country.

Troops on the ground are crying out for more air support, which ranges from firing on the enemy to evacuating casualties from the battlefield. The day Afghan aircraft can meet the high demand is still a long way off.

“Three weeks ago, two of our policemen were wounded in a fight with the Taliban and we waited for five days to transfer them to a hospital,” said a border police commander in the eastern province of Kunar, who spoke anonymously because he was not authorised to speak to the media.

“Sometimes we have to wait a week for a helicopter to evacuate our casualties,” added the officer, stationed in a remote area close to the Pakistani border.

Advisers for the U.S.-led NATO coalition, which is training Afghan armed forces now the alliance’s main combat mission is over, say they are struggling to field enough experienced pilots and crews.

“Our challenge is the human capital,” said Colonel Troy Henderson, commander of the U.S. Air Force’s expeditionary advisory group in Kabul, noting it is relatively easy to buy aircraft but more difficult and slower to find and train pilots.

The roughly 130 aircraft are not enough, according to Major General Abdul Wahab Wardak, commander of the Afghan air force. And the problem is now compounded by a lack of trained crews for existing aircraft.

The United States has provided a growing number of more advanced aircraft in the past year, seeking to make up for the withdrawal of most international forces.

But in the process of building a special operations air wing and training crews to fly new aircraft like the small A-29 attack aircraft and C-130 cargo planes, coalition advisers had to pull experienced pilots from other units, Henderson said.

As more aircraft have been fielded by the Afghans, crew shortages are limiting the deployment of widely used aircraft that form the backbone of the air force.

Among the unit that flies small Cessna C-208 propeller transport planes out of Kabul, for example, there are six crews for 12 aircraft, Henderson said. Twenty-four pilots are scheduled to rotate in soon, which will minimize, but not completely overcome the shortage, he added.

“We have a critical situation,” said C-208 pilot Saifuddin Popal, speaking at Kabul airport as he prepared to fly another load of passengers to a military base in southern Afghanistan.

On the return trip, he might be carrying more passengers, casualties or cargo, and may have to make several stops on the way, he added.

“Sometimes we fly from 7 a.m. until 6 p.m. We have a limit and if we fly more we become exhausted.”

At least nine aircraft were lost last year, most to accidents or maintenance issues, officials said.

So far in 2016, the Afghan air force has lost only two Mi-17 helicopters, which advisers said indicated that pilots were becoming more experienced.

Aircraft have been a lifeline over the past year to ground troops cut off by Taliban fighters in areas like Helmand and Kunduz, but the lack of crews means the air force cannot keep up, said Nazar Mohammad, another transport pilot.

“There are fewer pilots and more operations,” he said, running through pre-flight preparations in the cramped cockpit of a C-208. “If there are deaths and injuries everywhere, how can our schedules keep up?”

Training One Thing, Experience Another

Despite the challenges, retention remains relatively high in the air force, with month-to-month rates usually above 90 percent, according to the U.S. military.

For the latest officer class of 110 students, there were around 2,000 applicants, said a US officer who advises Afghan recruiters.

But finding qualified applicants can be a challenge, as pilots, crew chiefs, and maintenance workers have to be literate and usually must be able to speak English.

Foreign contractors have been used to help with maintenance, but officials have been hesitant to use them in more sensitive military roles, or in a way that the Afghan government may not be able to afford in the long term.

Coalition trainers are sometimes used to help fly C-208s, but both coalition pilots and foreign contractors are only allowed to fly to international bases, Henderson said.

Pilots and other crew members are being trained abroad as well as in Afghanistan, Wardak said, including the United States, Czech Republic and United Arab Emirates.

“They are young,” he said of incoming Afghan pilots. “These guys are out front, leading the sorties, and they’re making the decisions that I didn’t make until I’d been flying for three, four or five years. Building that experience just takes time.”