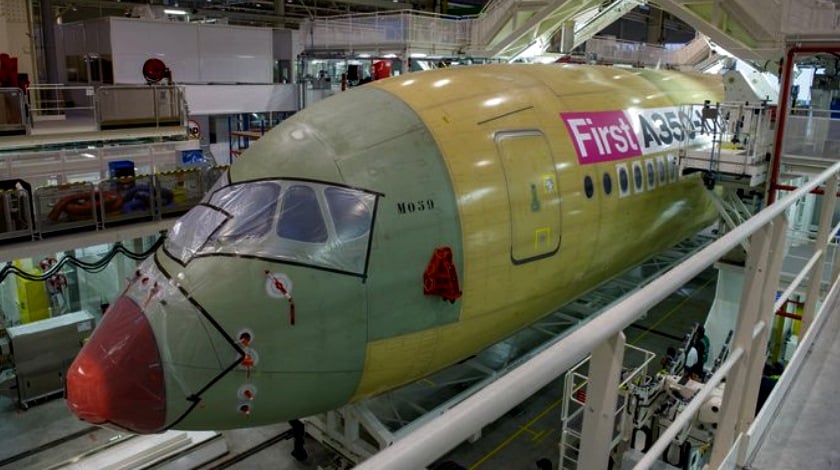 To ensure the smooth integration of the A350-1000 into the FAL while A350-900 production is ramping-up, Airbus has added three additional final assembly stations. For maximum flexibility, all stations in the A350 XWB FAL can be used for both models.

Currently in “Station 50” for fuselage join-up and nose landing gear installation, the first A350-1000 will next move to “Station 40” where the wings, main landing gear, pylons and tail planes will be installed. To save time and optimise the A350 assembly process, Airbus starts the cabin furnishing and first electrical power-on in parallel to the structural assembly work.

After this stage is completed, the aircraft continues through the FAL process, with final structural activities, ground tests, painting, cabin & cockpit completion and engines installation before being transferred to the flight test centre.

While having a very high degree of commonality with the A350-900, the A350-1000, measuring nearly 74 meters from nose to tail, is the longest fuselage version of Airbus’ all-new family of wide body jetliners.

The A350-1000 will be powered by Rolls Royce Trent XWB-97 engines, the most powerful engine developed for an Airbus aircraft. The A350-1000 comfortably seats 366 passengers in a typical 3-class configuration and flies on routes of up to almost 8,000 nautical miles which represents a significant revenue-generating advantage for operators. So far, Airbus has won 181 A350-1000 orders from 10 customers.