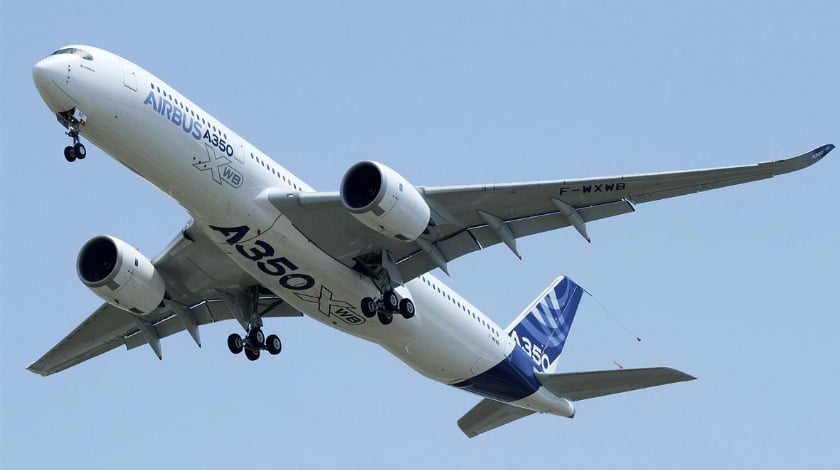 Airbus will offer its A350-900 twin-engined widebody aircraft with a 280-tonne maximum takeoff weight (MTOW) from 2020.

The standard -900 aircraft—offered as a 268 tonne aircraft, will have the same MTOW as the recently launched ultra long-range version of the aircraft, adopted by Singapore Airlines for its nonstop flights to the US.

At the same time, the company will give the aircraft 2% reduction in fuel burn, with 1% coming from aerodynamic improvements, while the other 1% will come from changes within the Rolls-Royce XWB-84 engine, Airbus is due to announce here on the eve of the FIDAE Airshow on March 28.

Airbus says the combined MTOW increase and efficiency improvements will nudge the -900’s range up by an additional 500 nautical miles, if the aircraft is carrying 325 passengers in a three-class configuration.

“Airlines have pushed us in two directions on the A350,” Airbus EVP-strategy Kiran Rao said in London on March 23, pointing out that the -900 is being offered in a regional configuration with down-rated engines as well as in the ULR variant.

Rao said airlines increasingly wanted flexibility within their fleets, with the option of moving regional aircraft into long-haul operations. By offering the higher-takeoff weight option into the standard -900 provides more flexibility depending on airline requirements, Airbus believes.

The company has already developed a 278-tonne MTOW higher gross weight version for Philippine Airlines and its transpacific services.

“We can take a regional aeroplane and turn it into ultra-long range, and vice versa,” said Rao.

“We are creating a flexible aircraft, and airlines buy into flexibility.”

Rao gave few details about the aerodynamic performance improvements, but the company says they have been flown and tested.

The A350 is making its Latin American public debut at the FIDAE Airshow, and is due to arrive here in Santiago from Buenos Aires on March 28.