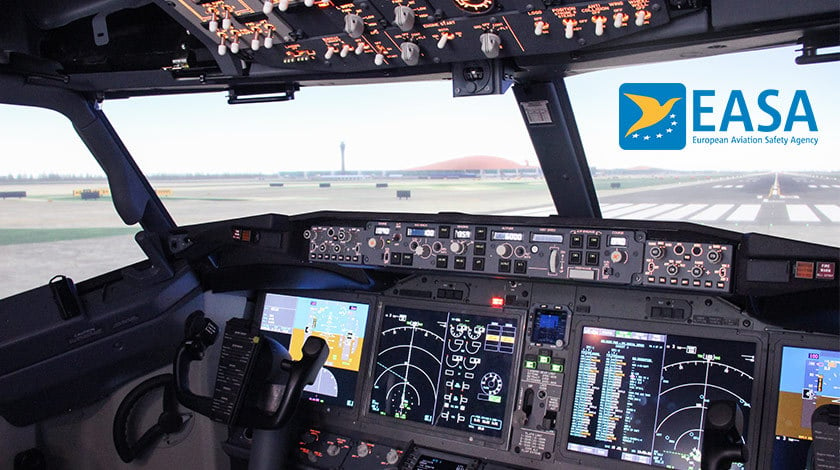 It is “the most scrutinized, most audited aircraft in history” – this is how Michael O’Leary, Ryanair’s CEO, called the Boeing 737 MAX.

In less than no time, the most demanded aircraft in history turned into an investigation object by aviation safety regulators worldwide. Almost two years of Boeing 737 MAX grounding, extensive works on design and software changes, collaborative and independent reviews, and finally, the type is cleared to fly in Brazil, Mexico, the USA, and just recently – in Europe.

All of the regulators have unanimously claimed that no single pilot can return to operating Boeing 737 MAX without completing additional training in a full flight simulator (FFS) and requested upgrades to various Boeing 737 MAX training programs. The training requirements are broadly the same for each of the regulatory bodies. The article takes a closer look at Boeing 737 MAX news related to piloting training.

It has already been established the new Maneuvering Characteristics Augmentation System (MCAS), which is integrated into Boeing 737 MAX and intended for “pushing” the nose of the aircraft down to prevent stall (loss of lift), was not on pilot training manuals previously. Therefore, pilots were unaware of the procedures to follow if the anti-stall system would start working with the erroneous sensor values.

After all the scrutiny and enhancements, from now on, Boeing 737 MAX pilots will have to cover requirements for MCAS, Autopilot Flight Director System (AFDS) peculiarities, and additional Special Emphasis Areas during both ground and flight training. Here are some of the mandatory elements to be studied during initial, upgrade, transition, differences, recurrent training, or all at once:

They are described in more detail in chapter 9, point 9.2 of the FBS report by FAA, which EASA also makes reference to.

Both EASA and FAA require pilots flying Boeing 737 MAX or conducting 737NG/737 MAX Mixed fleet flying (MFF) to complete a return to service training (RTS). The detailed overview presented in Appendix 7 of the FAA Flight Standardization Board Report (FBS) is the key source for more information which both regulators offer for familiarization.

The training consists of the ground and flight time and is expected to take around 5 hours in total, according to multiple resources and airlines who have already resumed flights specifically. The breakdown is approximately the following: 90-120 min. of computer-based training (CBT), 2 hours in a Boeing 737 MAX* Level C or D FFS, and a one-hour debriefing session. The below bullet points are taken directly from Appendix 7 of the FBS and describe the Boeing 737 MAX flight training segments. They can be completed as standalone or embedded into another curriculum.

2.1 Demonstration of MCAS activation accomplished by each pilot acting as PF.

2.1.1 MCAS activation during an impending stall (or full stall) and recovery demonstration during manual flight in a clean configuration.

2.2 Runaway stabilizer condition requiring use of manual stabilizer trim accomplished by each pilot acting as PF.

2.2.2 Operation of each manual trim technique (as defined by Boeing).

2.3 Use of manual stabilizer trim during approach, go-around, and level off accomplished by each pilot acting as PF.

2.4 A Cross-FCC Trim Monitor activation demonstration accomplished by either pilot acting as PF.

2.4.1 Condition must terminate in a landing in order to demonstrate the updated STAB OUT OF TRIM light functionality.

2.5 Erroneous high AOA during takeoff that leads to an unreliable airspeed condition accomplished by either pilot acting as PF.

2.5.2 Fault occurring during the takeoff procedure.

2.5.3 Must include a go-around or missed approach flown with erroneous high AOA condition.

The rules of the game have changed since the times of initial Boeing’s marketing campaigns, which stated that no simulator time was required to be able to pilot Boeing 737 MAX while having an active 737NG Type rating. New York Times has published Boeing’s former promotional material where “no flight simulator required” and “Level B Training” were presented as unique selling points. 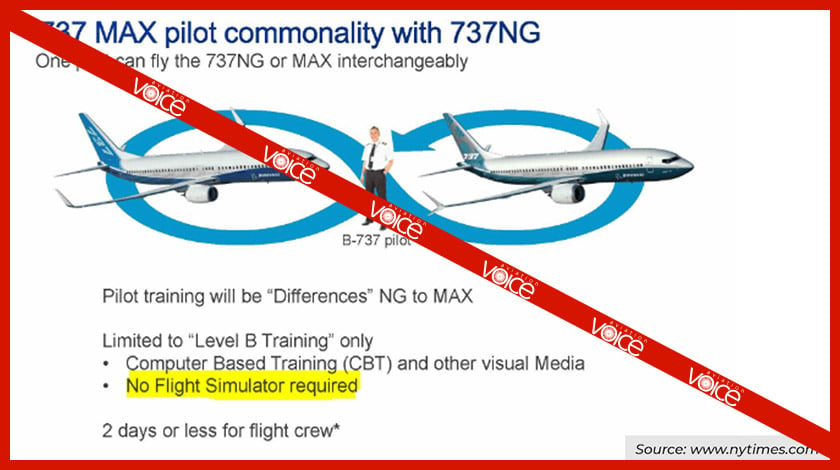 As Boeing indeed considered the differences between the types to be minor back then, Boeing 737-800 pilots had to go through a one-hour computer-based session to jump straight on Boeing 737 MAX.

In a statement, American Airlines said, “Boeing 737-800 pilots were required to receive some additional training on the MAX 8, which included an hour lesson on some differences. Additional training was not required, as the 737-800 and the MAX 8 have same type certification.”

Aviation training centers will now have to update their Type Rating programs related to Boeing 737 MAX to keep them compliant with the latest changes. 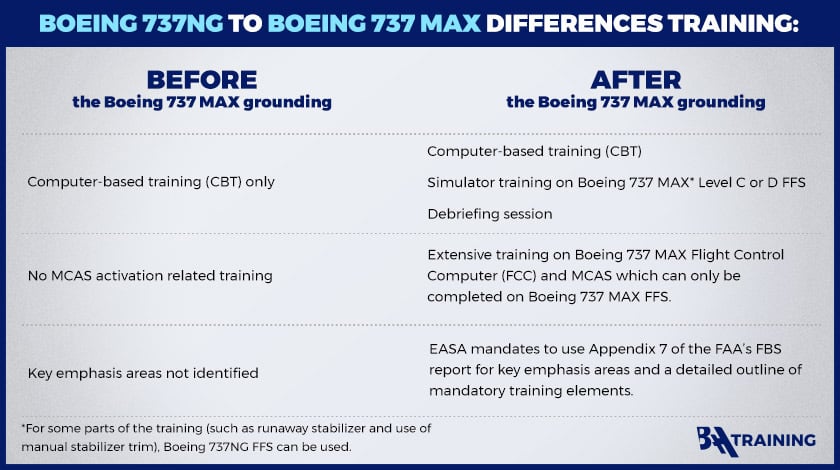 The Head of Training at BAA Training, Arunas Miezanskas, says “We as an approved ATO do plan to introduce a Boeing 737NG differences program to 737 MAX, which will comprise computer-based and simulator training. We will definitely make sure the program includes all of the necessary items and corresponds to the requirements put forward by EASA and Boeing’s recommendations regarding 737 MAX training.”

Although at this stage, the simulator flight training (as well as ground training) is undoubted, as can be seen from the Master Differences Requirements (MDR) below, the Level B training has not changed. The table was taken from Appendix 2 of the FBS paper but the same information can be found in Operational Suitability Data report by EASA.

The Level B training concept means that pilots do not have to complete any device training, contrary to, for example, level D, which “applies to related aircraft having full task differences of knowledge, skills, and/or abilities” and “can only be accomplished with devices capable of performing flight manoeuvres in a dynamic real-time environment,” as it is identified in FAA AC 120-53B. 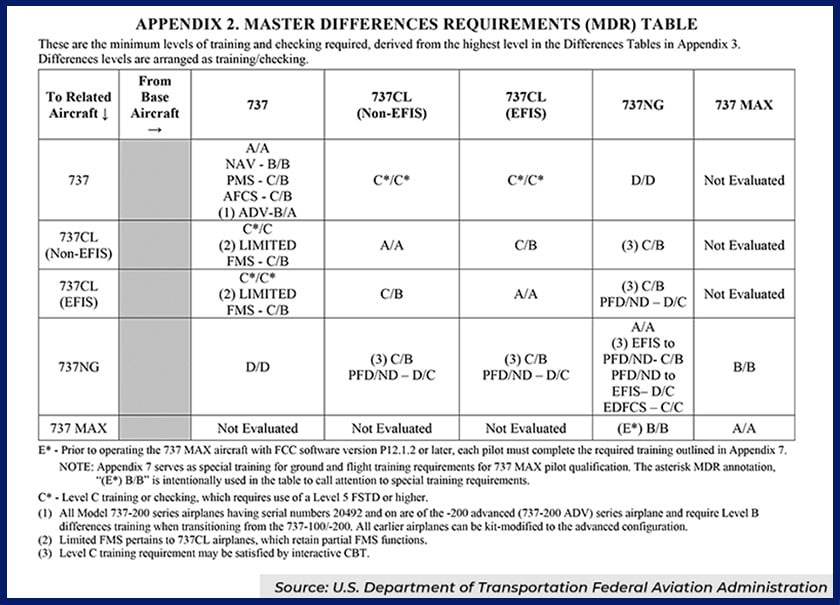 There are opinions that a more logical solution would have been to change the training Level from B to D and the type of device required from an FFS to a fixed-based simulator (FBS). The training level would have then addressed the complexity of the systems and better reflected the reality, while airlines, which have been hit hard by the pandemic, could substantially reduce their costs. However, the regulators have decided to allow for a combination of Boeing 737NG FFS and Boeing 737 MAX FFS training (as described in the previous section in italics), with the latter FFSs being particularly scarce globally.

The number of available certified Boeing 737 MAX flight simulators worldwide is 34. According to Boeing, it owns eight, and airlines possess the rest 26. Compared to more than 200 737NG simulators, roughly three dozen does not seem to be a high number. Thousands of pilots from more than 54 airlines will have to squeeze into a limited number of Boeing 737 MAX simulators to conduct training so they can fly this type of aircraft.

The data presented below reveals that there are 11 EASA qualified Boeing 737 MAX FFSs, which are all Level D certified and carry an “active” status. The majority of them – four FFSs – belong to Boeing U.S. Training & Flight Services and are spread across Singapore and the UK. Three more FFSs are at the disposal of East Midlands Training Ltd training provider based in the UK, and the rest are the assets of such carriers as Icelandair and Turkish Airlines. 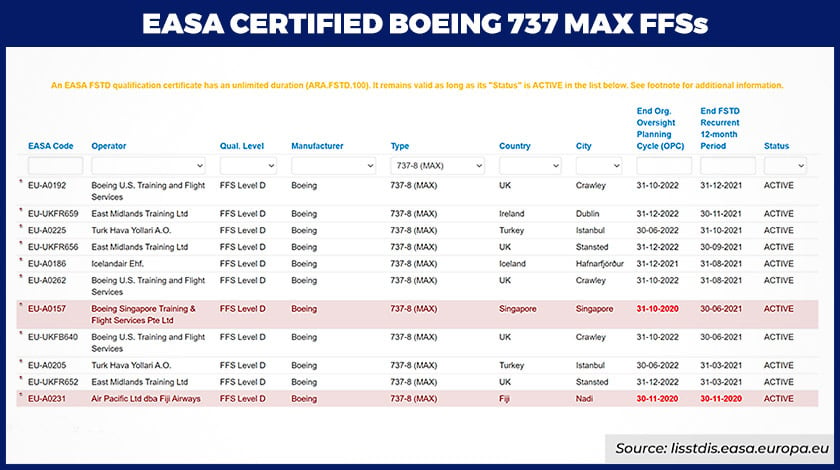 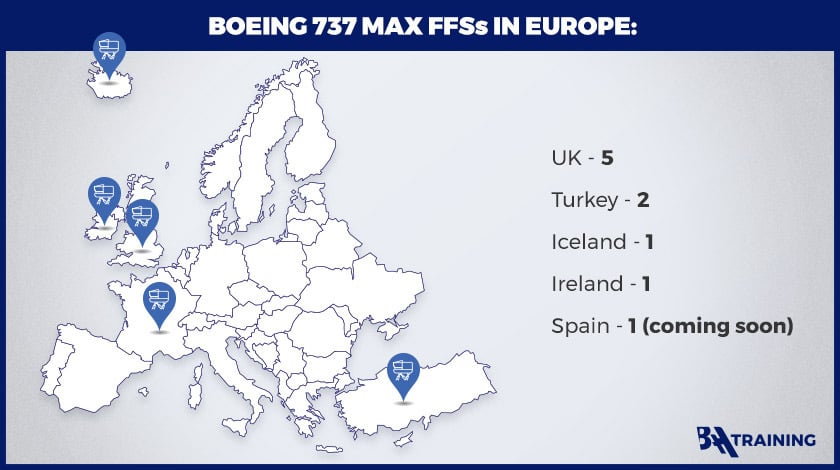 Based on the data from planespotters.net, there are 60 Boeing 737 MAX aircraft in Europe and some airlines which have it in their fleets are Norwegian, Smartwings, Tui Airways, and Icelandair. For a full list, please refer to this article. Presumably, they will be the first to seek Boeing 737 MAX simulators training.

The moment of a full Boeing 737 MAX recertification has been long-awaited by the industry players, especially those who are in either way dependent on Boeing 737 MAX and its future. The regulators have taken a big step, but nobody is advised to take for granted that the Boeing 737 MAX story ends here.

“Let me be quite clear that this journey does not end here,” Patrick Ky, EASA’s CEO, said. “We have every confidence that the aircraft is safe, which is the precondition for giving our approval. But we will continue to monitor 737 MAX operations closely as the aircraft resumes service.”

Simulators training will be an essential aspect of Boeing 737 MAX returning to the skies. As EASA has confirmed earlier, airlines are free to book FFS hours and resume operations without waiting for the final approval of its Airworthiness Directive.