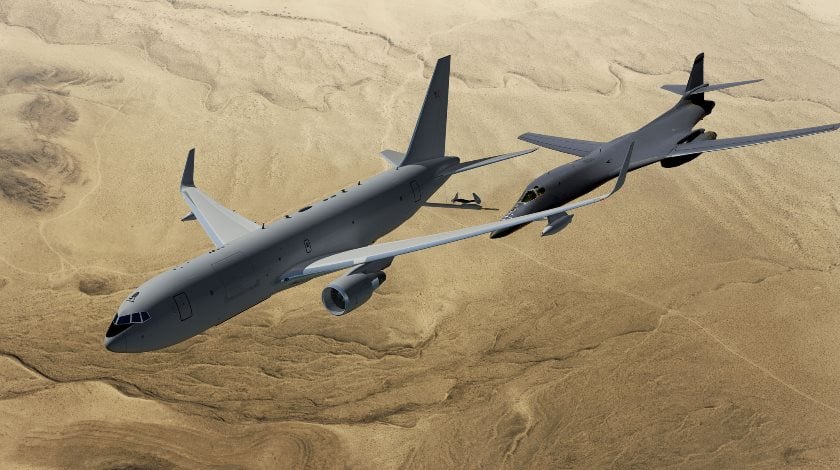 The first fuel transfer from a Boeing KC-46A tanker to a receiver aircraft was completed on Jan 24, marking a key step towards fulfilling requirements for the U.S. Air Force’s Milestone C decision covering low rate initial production of the first batch of tankers.

The contact was made between EMD-2, the first fully configured KC-46A test aircraft, and an F-16C from the Edwards AFB, California-based 416th Flight Test Squadron over the shores of southern Washington and northern Oregon. Further flights were also conducted with the tanker formating with an Air Force C-17 from nearby McChord AFB.

Follow-on testing is planned for the coming weeks including fuel transfers to a C-17, A-10, F/A-18 and AV-8B, while the KC-46A will also take fuel from a KC-10. The current test effort, which is expected to include boom compatibility checks on Jan 25, has required intensive co-ordination between Boeing and the Air Force with combined operation of the manufacturer’s chase and safety T-33 and T-38 flight test aircraft with additional KC-135 tanker support from the Air Force.

The Air Force says the test with the F-16C “fulfilled the requirement to connect to a light/fast receiver. The remaining tests with the boom will use an A-10 Thunderbolt II as the light/slow receiver and a C-17 as the heavy receiver. Flight tests employing the centerline drogue system and wing aerial refueling pods will use an F/A-18 Hornet as the light/fast receiver and an AV-8B Harrier as a light/slow receiver.” The KC-46A will also have to demonstrate its receiver capability by taking fuel from a KC-10 Extender, it adds.

Although Boeing and the Air Force originally planned to begin air refueling tests before the end of 2015, the slide into January is not expected to jeopardize the Milestone C decision which was already pushed back to early 2016 following earlier program delays. Development issues with wiring and the fuel system held back the first flight of the tanker-configured test aircraft to last September which Boeing and Air Force officials admitted at the time reduced the margin to meeting the Pentagon’s production decision milestone and increasing the risk of incurring further penalties.

The Air Force says the program “is currently working to meet the Required Assets Available date, a milestone requiring 18 KC-46A aircraft and all necessary support equipment to be on the ramp, ready to support warfighter needs, by August 2017.”

EMD-2 was built as part of the Air Force’s 2011 contract to design and develop the next-generation tanker. Boeing has built four test aircraft, two of which are currently configured as 767-2Cs and two as KC-46A tankers. The KC-46s will fly as fully equipped tankers until FAA and military certification is achieved, while the 767-2Cs will subsequently be upgraded to the KC-46A configuration and provisioned with aerial refueling systems.

The KC-46A completed aerial refueling initial airworthiness late last year, clearing the way towards the start of the air refueling test campaign. The aircraft also underwent fuel dock testing to validate the fuel transfer control functions. In the weeks leading up to the first refueling flight, EMD-2 has also performed what is believed to be additional flutter testing and has worked in close co-operation with Boeing’s T-38 chase aircraft around northern Washington.