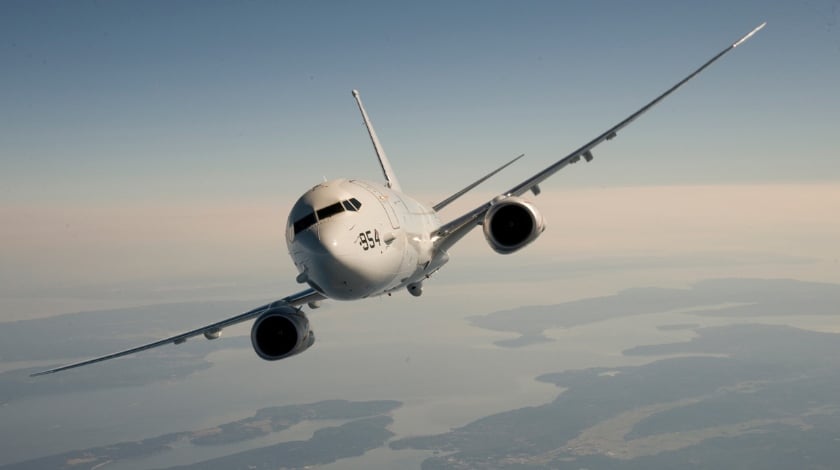 Officials of the Naval Air Systems Command at Patuxent River Naval Air Station, Md., announced a $2.5 billion contract modification on 28 Jan. to the Boeing Co. (NYSE:BA) in Seattle 20 Lot III full-rate production P-8A maritime patrol aircraft – 16 for the Navy and four for the government of Australia.

The P-8 is a militarized version of the Boeing 737 single-aisle jetliner hardened for long-range maritime patrol and anti-submarine warfare (ASW) missions. The P-8 is scheduled to replace the Lockheed Martin P-3 Orion maritime patrol turboprop aircraft.

Ultimately, the Navy plans to buy 108 P-8A aircraft from Boeing to replace the service’s fleet of 196 P-3C Orion maritime patrol aircraft, which are approaching the end of operational life. The P-3 is a version of the Lockheed Martin Electra four-engine turboprop aircraft.

Navy officials plan to use the P-8A in tandem with the Northrop Grumman RQ-4N Triton Broad Area Maritime Surveillance (BAMS) unmanned aerial vehicle (UAV) – a maritime-patrol version of the Global Hawk long-range surveillance UAV. Plans call for using BAMS to detect potentially hostile submarines and surface ships, and upon detection, to call in the P-8A to take a closer look or to attack hostile vessels with torpedoes and missiles.

Boeing is building the Poseidon aircraft at its factory in Renton, Wash. The 737 fuselage and tail sections will be built by Spirit AeroSystems in Wichita, Kan., then transferred to Renton where all structural features are incorporated in sequence during fabrication and assembly.

The Poseidon’s MX-20HD digital electro-optical and infrared (EO/IR) multi-spectral sensor turrets come from L-3 Communications Wescam in Burlington, Ontario. The MX-20HD is gyro-stabilized and can have as many as seven sensors, including infrared, CCDTV, image intensifier, laser rangefinder, and laser illuminator.

The P-8A will have the CAE Inc. advanced integrated magnetic anomaly detection (MAD) system. The Navy plans to arm the P-8A with the MK 54 torpedo.

On this contract modification Boeing will do the work in Seattle; Baltimore; Greenlawn, N.Y.; Cambridge, England; North Amityville, N.Y.; Rockford, Ill.; Rancho Santa Margarita, Calif.; Salt Lake City; and other U.S. locations, and should be finished by December 2018.