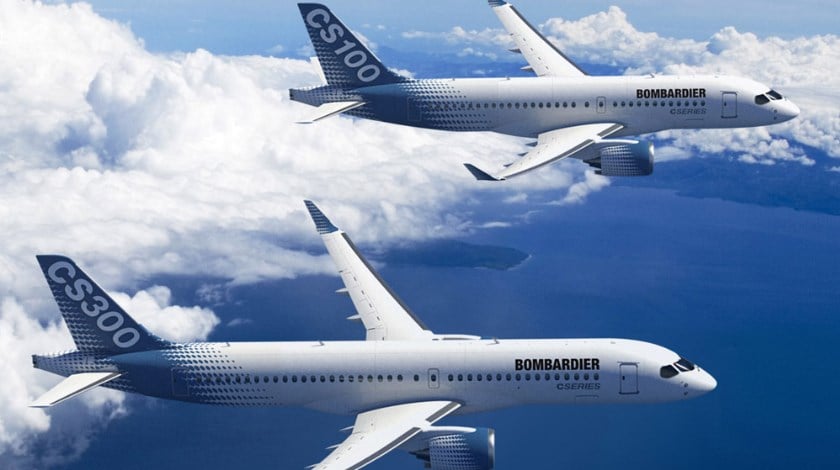 The first CSeries CS300 for launch operator airBaltic is on the final assembly line at Bombardier Commercial Aircraft’s plant in Mirabel, near Montreal.

At the same time, the first aircraft for CS100 launch operator Swiss International Air Lines is complete and has been powered up at Mirabel ahead of first flight.

The CS100 is on track to enter service with SWISS in June, and the CS300 with airBaltic in the second half of the year, Bombardier VP-CSeries program Rob Dewar said during a media tour Wednesday.

The first production CS100, aircraft P1, has begun route-proving flights for SWISS. Based in Zurich, P1 has so far flown to Hannover and Brussels, flown by Bombardier pilots but with SWISS proving ground support.

Initial flights are there-and-back, but the CS100 will shortly begin operating six flights a day between different destinations, as it will in SWISS service, to iron out any issues.

P1 has completed 450 hours of a 600-hour extended function-and-reliability test phase to be completed before entry into service (EIS). There have been snags, but no dispatch interruptions so far, Dewar said.

P1 is in the Build 6 certification standard, and Bombardier will shortly begin flying the EIS standard, Build 7. This cleans up nuisance warnings and introduces capabilities including Category 2B landings, hot-and-high runways and steep approaches.

The first of two CS300 flight-test aircraft, FTV7, is now at around the 500-hour mark. The second joined the flight test program at Mirabel March 3 and is the first with an interior. Dewar said the aircraft was on track for certification about six months after the CS100, which received Transport Canada approval in December.

Nine CSeries have been built so far, he says, and CS100s up to serial number 50015 have progressed through fuselage and wing join at Mirabel. The first CS300 for airBaltic has completed fuselage join.

Bombardier plans to deliver 15-20 CSeries this year to SWISS, airBaltic and other operators. The CS100 can seat 100-133 passengers, but is typically being specified with around 117 seats dual-class. Able to accommodate up to 160, the longer CS300 is being specified typically with 148 seats single-class and 137 dual, Dewar said.