Breaking Stereotypes: Woman at the Controls of an Aircraft 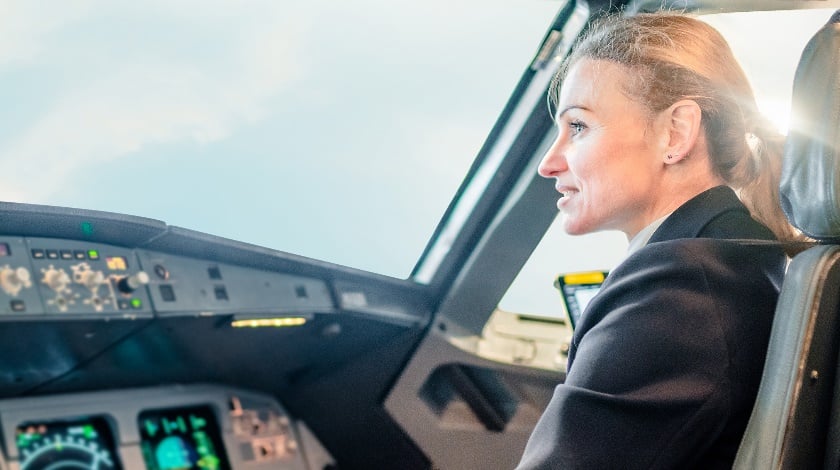 Most likely the first association with an airplane pilot will be a male in an accurate uniform. The picture is not completely inaccurate since about 95% of all active pilots in the world are in fact male.

However, there is a small, but brave part of this profession that is growing every year – pilot women. SmartLynx Airlines pilot Irina Talajeva explains how it is to be a woman in the aviation industry.

From a Desk Job to a Pilot Cabin

Aviation and planes came into my life through an enjoyable experience from an early age, when I often went to see my grandmother by a plane. At that time there were very few examples of female pilots in the aviation world and relatively little was told about them. It was simply not a profession attributed to women.

My career as a pilot began through a completely different profession in the banking sector. I have even obtained a master’s degree in economics.

However, as time went on, I began to remember my childhood dream and imagine what it would feel like if my next office were 10 kilometers high – above the clouds. My very first full-time job was also related to airlines.

It all contributed to my inner dream of becoming a pilot and pushed me quietly down that path. In 2012, I joined the SmartLynx Training Program, successfully completed all training and exams, and became First Officer in the same company.

In Aviation, Punctuality is More Important than Gender

The path to a pilot career for a woman is the same as for a man. First you have to graduate from the academy and then you have to master specific aircraft control skills. It takes about 2 to 3 years for both.

Perhaps in the learning process women get to prove themselves a little more because we are used to studying harder just to show that we can be at least as good as man. As a result, stubbornness even prepares us a little better.

In any industry today, the specialist should not be judged by gender, but the ability and punctuality. And speaking of skills, working as a pilot requires exemplary abilities in multitasking and communication.

Time for Women to Conquer the Cockpit

This is the right time for more women to enter this profession. Today there is a worldwide shortage of qualified pilots and it is for this reason that I believe the number of female pilots could double or even triple in the next decade.

Even airlines are increasingly focusing on women as a potential workforce, by sharing their experiences and offering very welcoming training programs.

Regardless, no one is given any discounts. After all, piloting a plane is a team effort and a big responsibility. 1+1 should always be more than 2 in the cockpit. Pilots must work closely together when flying the aircraft, giving instructions to flight crew and of course keeping good communication with air traffic services on the ground.

Coordination must be timely and unambiguous. We need to express ourselves clearly and honestly so that everything runs smoothly.

As for me, it is a dream job with a breathtaking view through the window, an opportunity to see the world from the glaciers of Iceland to the deserts of Africa. This is not a standard job with working hours from 9 to 18, on the contrary it is a constant adventure.

Moreover, it is no secret that you can make a quite good money in it. I believe that over a time female pilots will no longer be admired as a rarity, but will become close to the first thought when imagining a pilot.