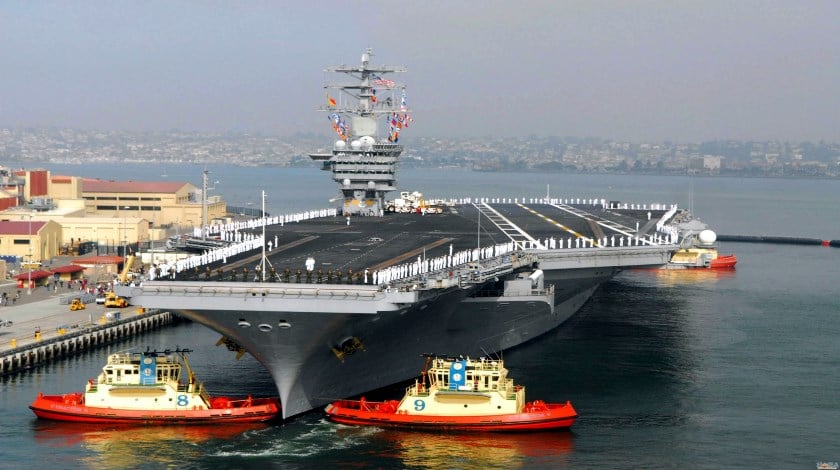 The first aircraft carrier to be made in China will be constructed according to the same blueprints used in building the Liaoning, a carrier which was constructed in Soviet Ukraine in the 1980’s and later sold to the People’s Liberation Army.

China has confirmed that it will construct an aircraft carrier domestically for the first time to accompany the People’s Liberation Army (PLA) Navy’s sole existing carrier, the Liaoning, according to reports in the Chinese press last week.

The South China Morning Post (SCMP) reported confirmation from China’s Defense Ministry that the country’s second aircraft carrier will be constructed at the Dalian shipyard, which is located on the Liaodong Peninsula in Northeast China.

China will construct the vessel according to the Soviet blueprint the Chinese navy obtained when it bought its Liaoning aircraft carrier from Ukraine’s Black Sea Shipyard in 1998. Construction began on the Kuznetsov-class carrier for the Soviet fleet in 1985; it was first called the Riga, then the Varyag, and was launched to sea in 1988.

In 1992, the cash-strapped Ukrainian government decided to sell the ship when it was two-thirds built; the unfinished vessel was eventually bought by China in 1998 for more than $20 million, or $25 million according to some reports. For comparison’s sake, the USS Harry S. Truman, which was commissioned in 1998, cost $4.5 billion, or 225x that amount. As part of the deal, the Chinese navy also received 40 tons of Soviet blueprints for the carrier’s construction.

“The PLA Navy was able to extract eight truck loads of detailed plans of the Liaoning from the Ukrainian vendors. These will have to be the foundation of the present activity because China is now facing the same reality that has dogged the efforts of all the major navies of the last century,” James Goldrick, a former Australian navy admiral, wrote on Thursday in Australian policy blog ‘The Interpreter.’

“The greatest restraint on naval expansion in the industrial age has been neither budgets nor disarmament treaties. It has in fact been the lack of drafting expertise to translate the design concepts of naval architects into the detailed compartment-by-compartment drawings that allow the shipbuilders to do their work (arguably, this has been a key problem for Australia with the new Air Warfare Destroyers). The scale of the effort involved is demonstrated by the report that the Liaoning’s documentation amounted to many tons of paper.”

Goldrick wrote that the challenges for China of recruiting and training sufficient expert design staff at a time when it is expanding its navy in many different new classes requires the new ship to be a direct derivation of the Liaoning.

Last year, an expert at China’s Naval Military Studies Research Institute said that China needs at least three aircraft carriers to defend its national interests at sea. The researcher said that the ships could be built at the Dalian shipyard, where the Liaoning was refitted, or at the Shanghai-based Jiangnan Shipyard.

According to reports in the Chinese press revealed by SCMP, the new aircraft carrier will have a displacement of 50,000 tons and will be slightly lighter but with more space for fighter jets. The navy has opted for a ski-jump flight deck rather than a catapult launch system because its fighter pilots and crew have been training with Shenyang J-15 fighters on the Liaoning.