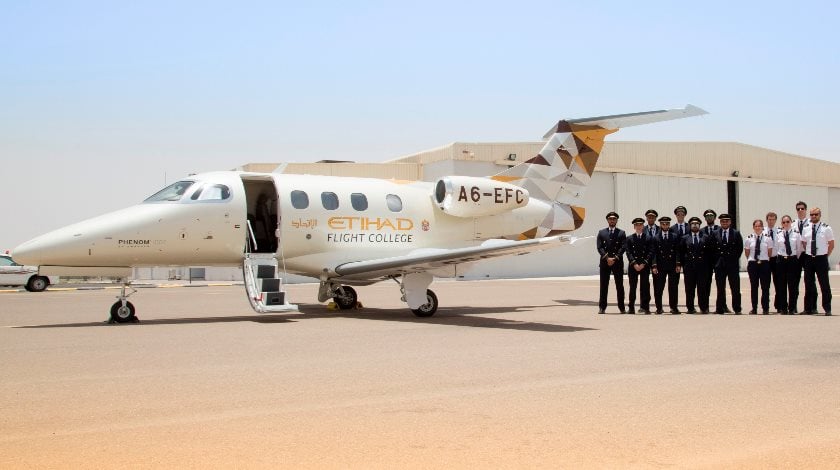 Embraer Executive Jets has delivered the first Phenom 100E to Etihad Flight College, a wholly-owned subsidiary of Etihad Airways, the national airline of the United Arab Emirates. The aircraft arrived yesterday in the city of Al Ain, base of the flight school established to train ab-initio pilots for the airline’s rapidly expanding fleet.

“Designed for high utilization with a pilot-friendly cockpit and docile flying qualities, the Phenom 100E has been considered an obvious choice by airlines for preparing its cadets for multi-engine jet operations”, said Marco Tulio Pellegrini, President and CEO, Embraer Executive Jets. “I’m glad to start deliveries of the Phenom 100E to Etihad Flight College, which will be the first flight school to use the aircraft in the initial phase of flying training.”

Embraer and Etihad Flight College announced a contract for four Embraer Phenom 100E in June 2015. A second Phenom 100E is scheduled to arrive at the flight college’s base later this month. Two additional jets will be delivered in early 2017.

“The Phenom 100E is an exciting new asset for Etihad Flight College. The airline-grade technology, performance and reliability make the Phenom an ideal initial training aircraft to prepare our students for line operations,” said Philip Chandler, Etihad Flight College’s General Manager. “Our flight college is a world-class training facility, producing a constant stream of well trained, highly-skilled pilots – the majority of whom are Emirati – for the growing operations of Etihad Airways.”

The Phenom 100E, Embraer’s first clean-sheet design light jet, which revolutionized the entry-level market, is also used by flight schools in the US, Finland and Australia for pilot training and instruction. A fleet of over 330 Phenom 100s is in operation worldwide.