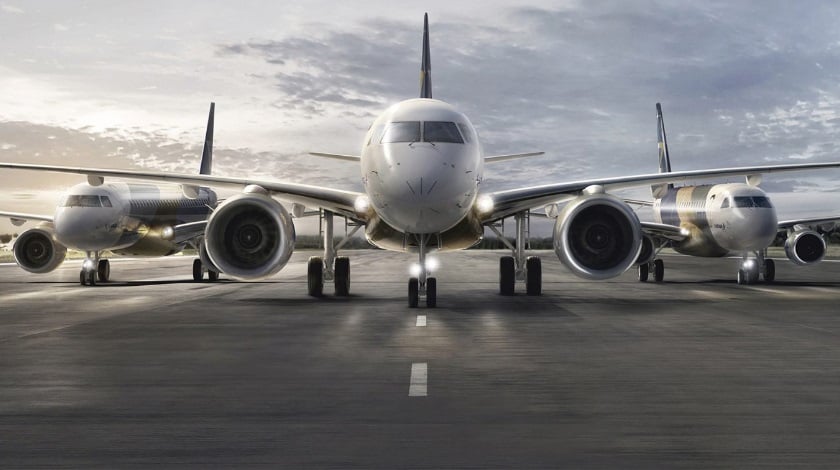 The deliveries were within the outlook ranges for the year of 97 to 102 commercial jets, 70 to 80 light business jets and 35 to 45 large business jets. In the last quarter of 2017, Embraer delivered 23 commercial jets and 50 executive jets (32 light and 18 large). As of December 31, the firm order backlog totaled USD 18.3 billion.

The commemorative aircraft was received by American Airlines, which in the quarter also signed a firm order for 10 additional E175 jets. During the last quarter, Embraer also received firm orders for more 15 E175 from an undisclosed customer and an order from Belavia, Belarusian Airlines, the national carrier of Belarus, for one additional current generation E195.

Embraer Defense & Security announced that the new Embraer KC-390 military transport and aerial refueling jet completed a major milestone with the attainment of the Initial Operational Capability (IOC) demonstrated to the Brazilian Air Force (FAB). The aircraft also conducted a series of flight tests in the United States as part of its certification campaign. During this period, the Defense & Security division signed contracts for the sale of 18 A-29 Super Tucano aircraft, six of them for the United States Air Force (to be used in the A-29 program in Afghanistan), six aircraft for the Philippine Air Force and another six for an undisclosed customer.

In Services & Support, Embraer extended its Flight Hour Pool Program agreement with Russia’s Saratov Airlines and with Austral Líneas Aéreas, the domestic airline of Aerolíneas Argentinas, to continue providing repairable component support for their E-Jets fleet. Another announcement was the establishment of a training center in Johannesburg, South Africa, the first facility of its kind in Africa to provide this range of training at a single location for qualified pilots, maintenance technicians, and cabin crew. December was also marked by the launch of the TechCare platform, designed to encompass a portfolio of innovative and competitive solutions, focused on improving operational efficiency, extending aircraft life and maximising fleet potential