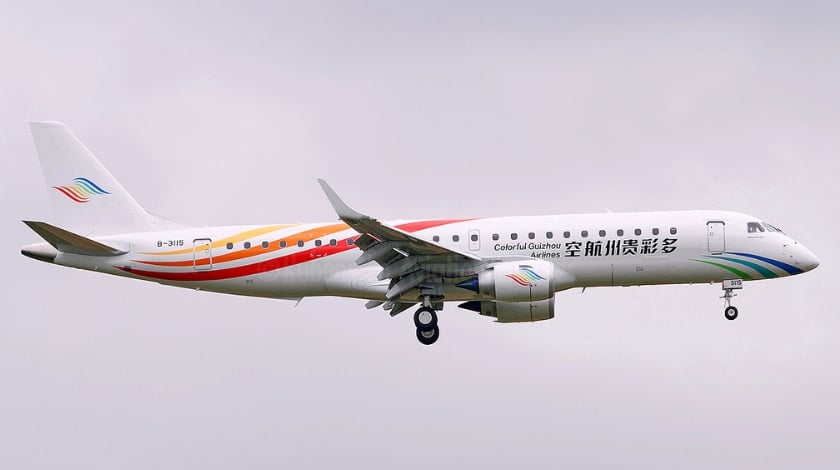 Embraer announced that it has signed an agreement for up to five E190s with Colorful Guizhou Airlines, including two firm orders and three purchase rights.

The firm order will be included in Embraer’s 2016 third-quarter backlog. The contract has an estimated value of USD 249 million at the current list price, if all purchase rights are exercised. The two aircraft will be delivered in 2017.

In June 2015, during the 51st International Paris Air Show, Colorful Guizhou Airlines placed an order for seven firm E190s, four of which have already been delivered.

Zhai Yan, Chairman of Guizhou Industrial Investment (Group) Co., Ltd and Chairman of Colorful Guizhou Airlines, said the company has built profound confidence in Embraer’s products and services. “As a newly-established and the first locally-owned airline in Guizhou province, Colorful Guizhou Airlines needs mature aircraft and services to guarantee our steady operation. Based on the aircraft’s performance during the past eight months, we are glad we picked Embraer’s E190, an aircraft model with good economy, unparalleled cabin comfort, and high reliability, which has enabled us to provide passengers with a good travel experience. We hope that the E190 fleet can help us build a sky passageway inside and beyond Guizhou province, and eventually contribute to improving the connectivity of China’s Southwest Region.”

Established in June, 2015, Colorful Guizhou Airlines completed its maiden flight only 216 days after its foundation, a miracle in the domestic aviation industry. Positioned as a low-cost regional and trunk carrier, Colorful Guizhou has already opened nine routes, including Guiyang-Zhuhai, Guiyang-Tianjin, Guiyang-Nanjing, etc., transporting over 140,000 passengers over the past eight months.

“Colorful Guizhou Airlines’ decision to purchase more E190s means a lot to Embraer,” said Guan Dongyuan, Senior Vice President of Embraer and President of Embraer China. “It is not only a recognition of our aircraft already in operation, but also a demonstration of the sincere trust between Embraer and Colorful Guizhou. As a manufacturer, as well as a service provider, Embraer China team will continue to be devoted to customer services and support, to safeguard the smooth operation of our customers. We deeply appreciate Colorful Guizhou’s trust and Embraer will be a loyal partner of Colorful Guizhou along this road to a brighter future.”

“China is among the most dynamic aviation markets in the world, and Guiyang is an important potential hub in southwestern China and we are glad to be part of it with Colorful Guizhou Airlines,” said Guo Qing, Vice President, Sales & Marketing, Commercial Aviation, Embraer China. “Embraer applauds the Chinese government’s ‘Belt and Road Initiatives’, and we hope that, as an aircraft manufacturer, we can contribute in this process by providing the best products to our customers.”

Embraer has been leading Chinese regional aviation with a market share of around 80 percent for several years. Embraer has now logged 228 firm orders in China, including 190 commercial aircraft, 21 of which are pending government approval, and 38 executive jets. To date, 168 aircraft have been delivered.