Emirates And Qantas To Extend Partnership 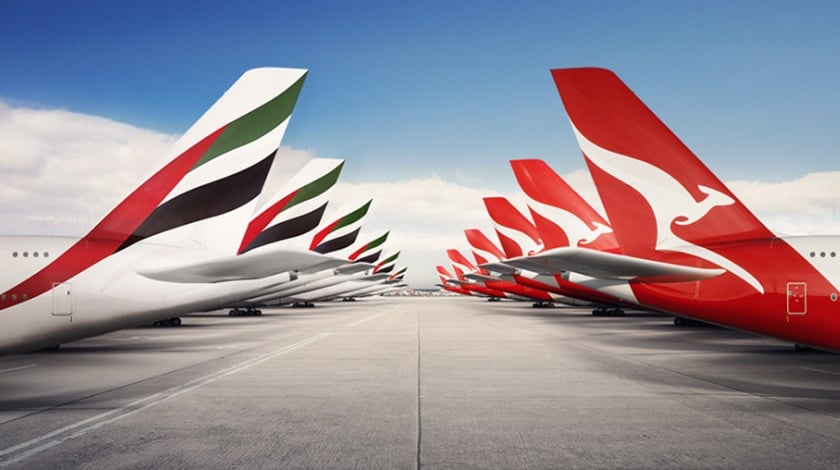 Emirates and Qantas will apply to extend their cornerstone partnership for another five years making changes to reflect customer demand, new aircraft technology and each airline’s respective network strengths.

These changes will deliver additional benefits to the eight million passengers who have travelled more than 65 billion kilometres on the combined network since 2013, increasing customer choice as well as frequent flyer earn and redeem opportunities.

The adjustments announced today will also deliver financial upside to both airlines, with Qantas annualised net benefit estimated at more than AU$80 million from FY19 onwards.

Meeting in Sydney, Australia, to finalise the extension, both airlines agreed the first five years of the partnership had lived up to the promise of serving their customers better, together. Changes to the joint network are designed to reinforce this for the next five years.

Analyst Saj Ahmad commented: “Emirates’ long term pact with Qantas has delivered huge success over the last few years for both airlines in the face of stiff competition and it’s no surprise that they want to extend this deal for a further five years.

“It is likely that regulatory approval from the ACCC will be granted, especially since most of the network changes are happening with Qantas re-routing London flights via Singapore. This move away from Dubai allows Emirates to better manage and gain more slots and gate space at its home hub – which as we know is already at a premium given how much traffic passes through the airport every month.

Ahmad added: “There’s nothing stopping Qantas from shifting any future European flights back to Dubai International if it so chooses – provisions for that flexibility is key to their partnership so that customers are afforded multitude of travel and connection options.

“With competitors like Qatar Airways under pressure due to the regional blockade and Etihad Airways reassessing its business strategy, there has never been a better business environment for Emirates and Qantas to deepen their collaborative efforts and it’s likely that this contact extension will not be the last one either. Future steps may include broadening the integration of each of their respective low cost arms in Jetstar and flydubai – bringing them into the fold would allow expanded capability and connections to Trans-Tasman and wider GCC city pairings.”

The key change will see the airlines better leeraging each other’s networks, by providing three options to Australia from Europe – via Dubai and Singapore, and direct to Perth.

Qantas will re-route its daily London – Sydney A380 service via Singapore rather than Dubai and upgrade its existing daily Singapore-Melbourne flight from an A330 to an A380. As previously announced, Qantas’ existing London-Dubai-Melbourne service will be replaced with its direct Dreamliner service flying London-Perth-Melbourne.

A detailed summary of the changes, including effective dates, is provided at the end of this release.

Qantas Group CEO Alan Joyce said the changes represented an evolution of the partnership to deliver additional benefits for customers, including the millions of frequent flyer members of both airlines.

“The first five years of the Qantas-Emirates alliance has been a great success. Emirates has given Qantas customers an unbeatable network into Europe that is still growing. We want to keep leveraging this strength and offer additional travel options on Qantas, particularly through Asia.

“Our partnership has evolved to a point where Qantas no longer needs to fly its own aircraft through Dubai, and that means we can redirect some of our A380 flying into Singapore and meet the strong demand we’re seeing in Asia.

“Improvements in aircraft technology means the Qantas network will eventually feature a handful of direct routes between Europe and Australia, but this will never overtake the sheer number of destinations served by Emirates and that’s why Dubai will remain an important hub for our customers.”

Sir Tim Clark, President Emirates Airline, said: “The Emirates-Qantas partnership has been, and continues to be, a success story. Together we deliver choice and value to consumers, mutual benefit to both businesses, and expanded tourism and trade opportunities for the markets served by both airlines. We remain committed to the partnership.’

“Emirates has worked with Qantas on these network changes. We see an opportunity to offer customers an even stronger product proposition for travel to Dubai, and onward connectivity to our extensive network in Europe, Middle East and Africa. We will announce updates in the coming weeks.

“Customers of both airlines will continue to benefit from the power of our joint network, from our respective products, and reciprocal frequent flyer benefits.”

The airlines will shortly seek re-authorisation from relevant regulators, including the Australian Competition and Consumer Commission, to continue coordination of pricing, schedules, sales and tourism marketing, under an expanded partnership.

Tickets for Qantas’ new services will be available from tomorrow.

Customers with existing bookings impacted by the changes will be re-accommodated onto the airlines’ new services or will be given the option to change their flights.

KEY CHANGES IN EFFECT FROM MARCH 2018:

The choice of three hub options between UK/Europe and Australia – Dubai, Perth and Singapore.

From 25 March 2018, QF 2/1 A380 service will operate London – Sydney via Singapore, replacing one of the existing Singapore – Sydney A330 services. The second Singapore -Sydney daily service will continue to be operated by an A330 aircraft.

From 25 March 2018, one daily Qantas Singapore – Melbourne service will be upgraded

KEY PARTNERSHIP STATS SINCE ITS AUTHORISATION IN 2013:

· More than eight million passengers have travelled on the joint network, travelling more than 65 billion kilometres.

Frequent Flyer members of both airlines have earned and used points flying on more than five million flights, travelling over 47 billion kilometres on the joint network.

· On average more than 10,000 Emirates passengers have travelled on Qantas’ domestic and regional services within Australia each month, increasing to 20,000 during peak periods.

Customers can access over 2,000 routes over the joint network.