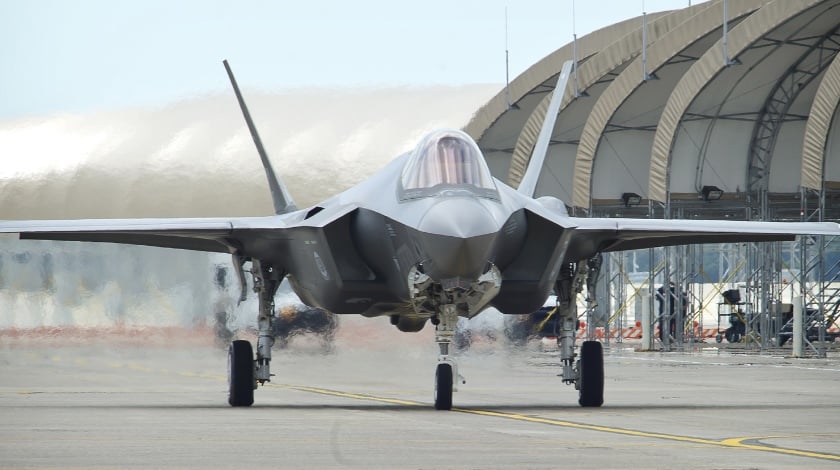 Not as agile as the Super Hornet nor as fast as the Typhoon? Don’t you believe it, says Lockheed Martin test pilot Billie Flynn. He will put the F-35A through its paces at Le Bourget this week, proving that the aircraft is more maneuverable than any he has flown, he says, including Boeing’s F/A-18, the Eurofighter, and his own company’s F-16 Viper.

“After 10 years since first flight, with our first opportunity to demonstrate the capabilities and the maneuverability of the F-35, we are going to crush years of misinformation about what this aircraft is capable of doing,” Flynn said in an interview with Aviation Week.

The F-35’s maneuverability is all the more impressive because, unlike the F-16s that perform at air shows, the Joint Strike Fighter flying the demonstration this week is fully combat-ready. Flynn’s F-35A will move easily through complex aerial maneuvers loaded with everything it needs to go to war.

“All of those airplanes that do air shows—the Hornet, Viper—they are all slicked off without all the external stores,” Flynn said. “They are a party trick at an air show, versus a combat-configured F-22 or F-35.”

The flight demonstration is carefully scripted to highlight the kinematic capabilities of the F-35A, particularly its slow-speed handling qualities, said Flynn. He will start with an afterburner takeoff, almost immediately pointing his nose to the sky and letting the aircraft climb away essentially vertically. This impressive move is unique to the F-22 and the F-35, he said.

From there, Flynn will pull up vertically in front of the crowd and execute a maximum AOA “power loop,” where the aircraft flips on its back—another signature Raptor move. Then he will initiate a spiral at 50 degrees AOA, called a “pedal turn,” which he says will be the most impressive part of the entire routine.

After reversing again in front of the crowd, the last move is a maximum-G, 360-deg. turn, which highlights the maximum-rate, minimum-radius-turn capability of the aircraft, Flynn said. The F-35 in its current 3i configuration is limited to 7g; when the fighter gets its full war-fighting capability with the final 3F software, it will be able to pull 9gs.

“This aircraft down low in this environment is an absolute monster,” said Flynn. ”It is more powerful, it is more aggressive than any of us, including those of us that fly the F-35, would have imagined before we began this flight-demo process.”

The high show does not include the F-35 opening its weapon-bay doors, as the F-22 does during its airshow routine. The low show, which the F-35 will perform if there is inclement weather or cloud ceiling, includes opening the weapon-bay doors, according to Lockheed spokesman Mark Johnson.

Lockheed’s F-35 airshow profile has been in the works for well over a year, according to Flynn. The team has conducted over 800 simulator runs to evaluate the profile, and Flynn began practicing in the aircraft at the company’s facility in Fort Worth, Texas, about a month ago.

Flynn had to modify the routine to accommodate airspace restrictions unique to the Paris show, he said. Flying is limited laterally and vertically because of Le Bourget’s proximity to both to the city of Paris and Charles De Gaulle Airport. Flynn is also limited by time—he only has 6 min. for the routine at Le Bourget, where at most air shows he would have 10 min.

“We focused on the ‘wow’ factor and left out the elements of a routine that would be part of a non-Paris-type profile,” Flynn said. “You have to live inside very tight restrictive boundaries, but it still permits us to put on a show that I believe will squelch the critics once and for all.”

So how will the F-35 demonstration compare to the Raptor’s always-impressive routine? It’s very similar, Flynn said.

“We all love what the Raptor can do. I would say the F-35 and the F-22 both put on demonstrations that are unique to our fifth-gen maneuverability,” said Flynn. “But don’t forget, that’s not how we dominate—we dominate because of stealth and sensor fusion.”

The two F-35As from Hill AFB, Utah, arrived at Le Bourget Airport June 13 and will be maintained on-site by Air Force maintainers and security personnel. One aircraft will be flying, and one will be on static display.