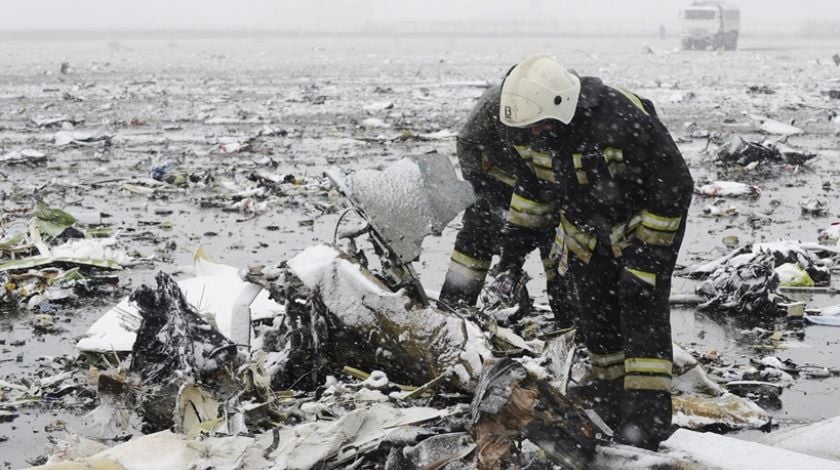 Russia’s Interstate Aviation Committee has released a report into the 2016 flydubai Boeing 737-800 crash which claimed the lives of 62 people. The final conclusions point out to poor captain’s psychological preparation for the manoeuvre, bad weather conditions and incorrect aircraft configuration.

The aircraft was performing a flight from Dubai to Rostov-on-Don. The first landing approach was aborted due to windshear warning. The crew went for a go-around and requested another landing attempt after over 1 hour 40 minutes.  The second attempt was also aborted because of high winds and turbulence.

Therefore, the report provides that the captain was not psychologically ready for another go-around and was focused on finally landing the aircraft at the airport of destination concerned over exceeding duty time for the return flight.

“The fatal air accident (…) occurred during the second go-around, due to an incorrect aircraft configuration and crew piloting (and) the subsequent loss of the (commanding pilot’s) situational awareness at night-time,” the report said.

As the result, after emerging from the cloud, the flydubai Boeing 737-800 in a steep nose-down attitude impacted with the ground close to the runway and disintegrated.

“The onset of the abnormal situation was at the point of initiation of go-around and, most probably, had resulted from the inherent lack of psychological readiness of the PIC to perform go-around that led to the loss of his leadership in the crew, the disruption of the flight mental mode and piloting errors, which within a short time were transformed into the inappropriate actions, resulted in the loss of control of the aircraft”, the report provides.

The report also highlighted that the accident occurred at “the worst possible time” in terms of circadian rhythms, when human performance tends to be degraded to its lowest level. Although both pilots had enough pre-flight rest, when attempting to land the plane, the pilots were flying for over six hours. Two hours out of these had been under intense workload, thus, operational tiredness is also among the contributing factors.

Reacting to the report, the CEO of flydubai said that “in accidents involving human factors, it is important to exhaust all possible scenarios when interpreting the factual data. It is the priority of the industry to understand all possible factors contributing to such a tragic accident and ensure critical insights that can make aviation safer are shared.”