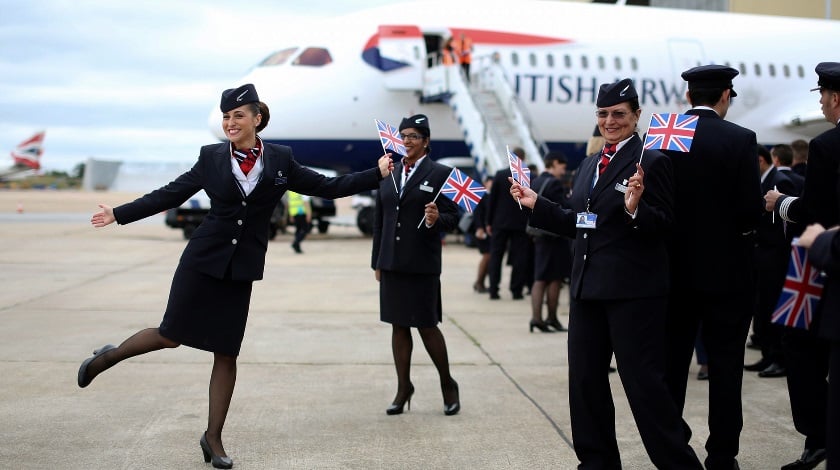 Two-year battle ends with airline allowing all crew to forgot the skirt and union hailing a victory for equality and common sense. An argument over who wears the trousers at British Airways has been won by the workers, after the airline agreed to allow all cabin crew, male and female, to keep their legs covered.

After a two-year dispute, all crew will be allowed to wear trousers if they choose, undoing part of the dress code imposed on new recruits who have joined the company since 2012.

The crew’s union, Unite, said BA was “joining the 21st century” by making the change, a decision made after an internal test case.

Established crew of either sex have long been allowed to wear trousers, but the new “mixed fleet” of crew – employed under inferior terms since the strikes in 2010 and 2011 – were subject to different rules. Female cabin crew on the 3,000-strong mixed fleet had to wear a skirt unless exempt on medical or religious grounds.

Unite said 83% of its members at the airline wanted the option of wearing trousers for warmth and protection.

A BA spokesperson said: “Our mixed fleet team wear the ‘ambassador’ British Airways uniform. While trousers are not a standard part of this uniform, colleagues wishing to wear them can request this through their manager.”

Unite regional officer Matt Smith said: “British Airways’ stance was unbefitting of a modern airline in the modern age, and demonstrates that Unite will not allow cases like this to go unchallenged.

“Not only is the choice to wear trousers a victory for equality it is also a victory for common sense and testament to the organising campaign of our members.

“Female cabin crew no longer have to shiver in the cold, wet and snow of wintery climates, but also can be afforded the protection of trousers at destinations where there is a risk of malaria or the Zika virus.”

Crew in BA’s worldwide (long-haul) and Euro fleets have been able to wear trousers since 2003, after a uniform overhaul by designer Julien Macdonald.

Cabin crew have suffered recent reversals in the wider trouser war, with Etihad removing the option in its revamp last year. In Britain, Virgin Atlantic reviews requests on a case-by-case basis, with skirts the norm. Only EasyJet crew are routinely able to wear trousers. Ryanair has yet to make trousers available, although since last year its female crew are no longer encouraged to pose in bikinis for an annual calendar.