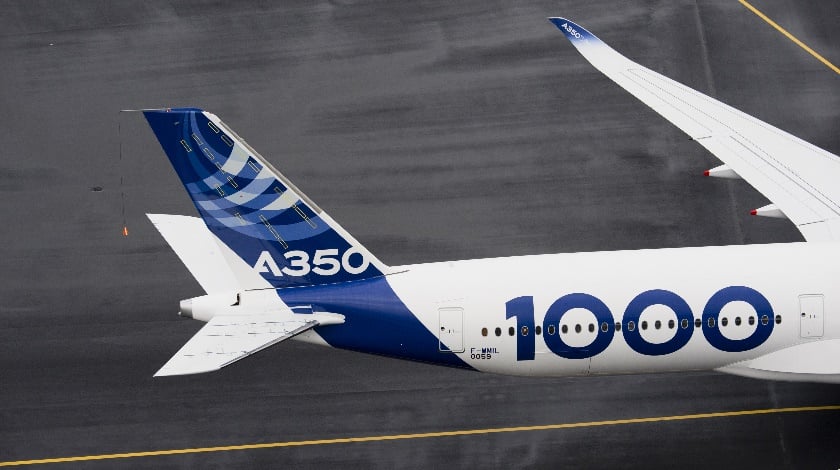 The first of three A350-1000 development aircraft to fly – MSN059 – has landed at Toulouse-Blagnac Airport France at 15.00hrs local time after successfully completing its first flight which lasted four hours and 18 minutes.

Powered by Rolls-Royce’s new Trent XWB-97 engines, the aircraft traversed south-western France, during which the crew explored the aircraft’s handling and flight envelope. The aircraft was accompanied by a chase plane to observe and film the various manoeuvres. Its progress was monitored by experts on the ground in real-time via a direct telemetry link.

Airbus President and CEO Fabrice Brégier said: “We have seen today the world’s most modern and efficient passenger aircraft – the A350-1000 – in action for the very first time, adding soon to the successful A350 Family. My congratulations and thanks go to all the teams who have contributed to make today’s flight happen.”

He added: “We are equally pleased that many customers have witnessed this important milestone today together with us – here from our headquarters in Toulouse.”

Benefitting from the experience of the original A350-900 test campaign (accomplished in 2014), the A350-1000’s development programme will be shorter – under one year for the three aircraft. MSN059’s duties for performance testing will include exploration of the flight envelope, handling qualities, loads and braking. The second aircraft to fly, MSN071, will also be tasked with performance evaluation, which will encompass braking, powerplant, systems and autopilot. The third and final aircraft to fly – MSN065 – will be equipped with a cabin and will evaluate the cabin and air systems. MSN065 will also perform the “early long flights” and route-proving.

The overall campaign will culminate in the type’s certification followed by its entry into airline service in the second half of 2017 with first operator Qatar Airways – the largest A350-1000 customer to date with 37 on order.

The A350-1000 is the latest member of the Airbus leading widebody family, together with the A330neo, offering unprecedented levels of operating efficiency, low noise and true long-range capability. As well as having a longer fuselage to accommodate 40 more passengers than the A350-900, the A350-1000 also features a modified wing trailing-edge, new six-wheel main landing gears and more powerful Rolls-Royce Trent XWB-97 engines. The A350-1000 embodies all of the fuel efficiency and ‘Airspace’ cabin comfort of the original A350-900 – but with extra size perfectly tailored for our customers on some of their busiest long-haul routes. To date 11 customers from five continents have placed orders for a total of 195 A350-1000s.