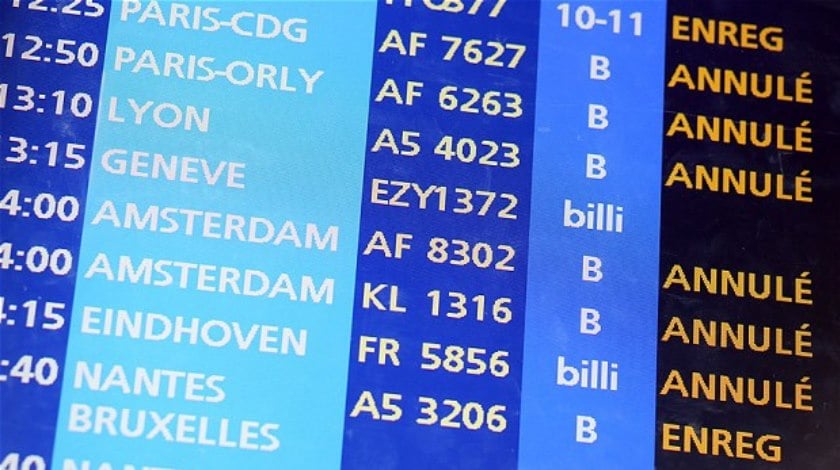 More than 100 flights will be cancelled and many others delayed according to Airlines for Europe (A4E), a lobby group representing carriers such as easyJet, Ryanair and British Airways’ parent company IAG.

The industrial action will disrupt flights operating to or from France, or over French airspace.

It is the 50th strike by French ATCs since 2009, which T homas Reynaert, managing director of A4E, described as a “pathetic milestone”.

He said: ” Understandably, European passengers and airlines are frustrated as these strikes take place at a very busy time of the year.

“The European Commission and governments must act immediately to protect the rights of millions of European travellers affected by this repeated and disproportionate industrial action.

“It’s not only holidaymakers whose travel plans are in jeopardy, but fans visiting Euro 2016, which is being held in France, are also at risk and face the real prospect of sitting on the tarmac on a delayed flight while holding tickets to see their country playing.”

Ryanair has cancelled 44 flights due to the 24-hour strike.

The airline is urging people to sign a petition calling on the European Commission and European Parliament to protect passengers from ” repeated blackmail and disruption by air traffic control unions”.

It is calling for French ATC unions to be required to engage in binding arbitration to resolve disputes, for other European ATCs to be allowed to manage flights in French airspace during strikes and the i ntroduction of a new regulation that protects international flights over France during a strike.

Ryanair’s chief marketing officer, Kenny Jacobs, said: ” These ongoing strikes by the French ATC unions are being directly aimed not only at families taking a well-deserved summer holiday, but also at the millions of football fans coming to France this summer for the Euros.

“It is shocking that a small group of unionised workers can hold a continent of football fans to ransom, and we regret that once again we have been forced to cancel a number of flights due to the selfish actions of these workers.”

A4E has previously said talks are ongoing with the European Commission about forming an action plan to reduce disruption from strikes.

It claims technology is already in place to enable immediate improvements in ATC, although a fully integrated airspace would require more advanced work.

Aircraft flying over the UK are controlled by ATC centres in Swanwick, Hampshire and Prestwick, Ayrshire.