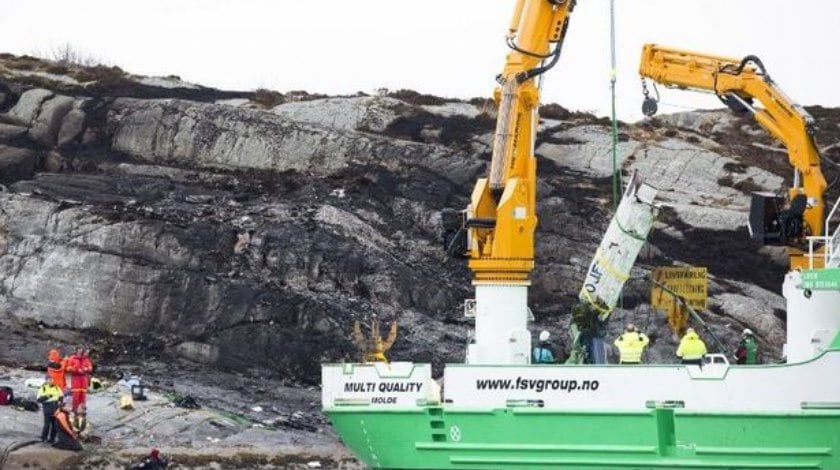 Emergency crews have pulled the wrecked fuselage of an Airbus EC-225 helicopter out of the sea off western Norway after a crash that killed all 13 people on board.

The Sun reported that the same helicopter had to abort another flight 16 minutes after takeoff just days before the crash. The problem reoccurred after a component was changed, but the chopper was approved for flight after the component was changed for a second time, the paper stated.

“It was a strong experience to meet the relatives. The youngest is six weeks old, the oldest is more than 80,” Solberg said after a meeting that lasted nearly two hours.

The helicopter was carrying workers from an offshore rig in the North Sea — the Statoil-operated Gullfaks B oil field — before it went down on Turoey, a tiny island outside Bergen, Norway’s second-largest city.

Eleven Norwegians, one Briton and one Italian were aboard. The rig is 120 kilometres off the Norwegian coast.

It was not known why the helicopter crashed just after noon on a sunny yet windy day. Norway itself has a strong aviation safety record. It was unclear whether the pilots had sent any mayday message before the crash. Police said they didn’t have any information on that and the spokesman for the Accident Investigation Board Norway, William J Bertheussen, declined to comment, citing the ongoing probe.

Statoil said the 11 passengers were employed by a variety of companies: the Houston-based Halliburton Co. and Schlumberger N.V., Norwegian firms Aker Solutions and Karsten Moholt, the Danish robotics company Welltec, and Statoil. The two pilots — a Norwegian and the Italian — were CHC Helicopter staff.

One of the victims was a 32-year-old Norwegian woman with Schlumberger while the British victim was a 41-year-old man working for Halliburton, police said later, adding that the victims ranged between 32 and 60. Their names have not been released.

Police have not yet identified the remains, saying that could take days.

Norway’s TV2 channel aired footage of what seemed to be a helicopter rotor blade spiralling down minutes before the helicopter crashed. The rotor was found on land, a hundred meters from the fuselage that crashed into the sea.

The Norwegian Civil Aviation Authority said the helicopter’s flight recorders were sent Saturday to Britain, where data from the black boxes would be read. In France, Airbus Helicopters sent two technical experts to Norway to assist in the investigation.

On Friday, Norway’s aviation agency banned such Airbus helicopters from flying in Norway or near Norwegian offshore facilities.

Airbus Helicopters said it was “allied with the decision taken to put all commercial EC-225LP passenger flights on hold” but the company didn’t urge operators worldwide to suspend flights.