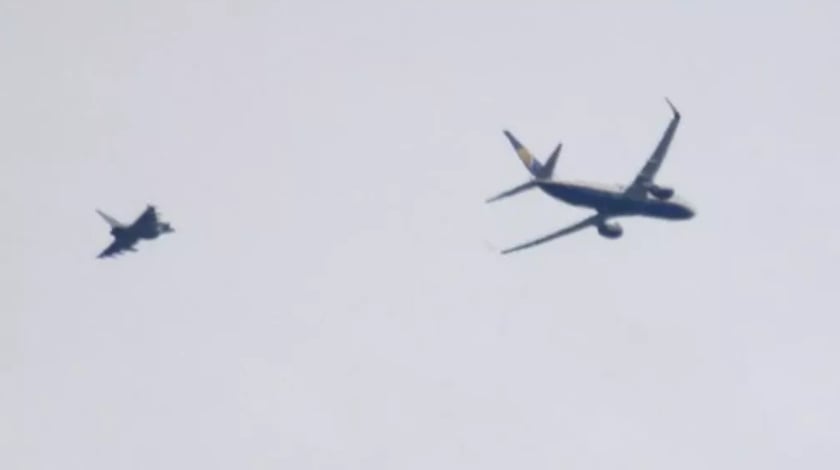 British fighter jets were scrambled to escort a Ryanair flight from Kaunas in Lithuania to London’s Stansted Airport on Wednesday after what the airline said was a hoax security alert.

Ryanair said that the flight was diverted after a hoax alert was received by Lithuania and communicated to the airline.

“This flight from Kaunas to London Luton diverted to London Stansted in line with procedures after Lithuanian authorities received a suspected hoax security alert,” it said in a statement.

It remains unclear what the hoax involved but The Times of London reported that the flight was intercepted amid reports of a “possible suspect package”.

“The RAF can confirm Quick Reaction Alert Typhoon aircraft were launched this morning from RAF Coningsby to intercept a civilian aircraft,” the Ministry of Defense told Newsweek in a statement.

“The aircraft was safely escorted to Stansted airport. The Typhoon aircraft were authorised to transit at supersonic speed for operational reasons; any inconvenience caused to local residents is regretted.”

Airspace around Stansted Airport was temporarily closed but the airport is now operating as normal. The customers on the flight are to be transferred to London’s Luton Airport by coach.

Britain remains on high alert after five extremist attacks since March, four of them claimed by the Islamic State militant group (ISIS).