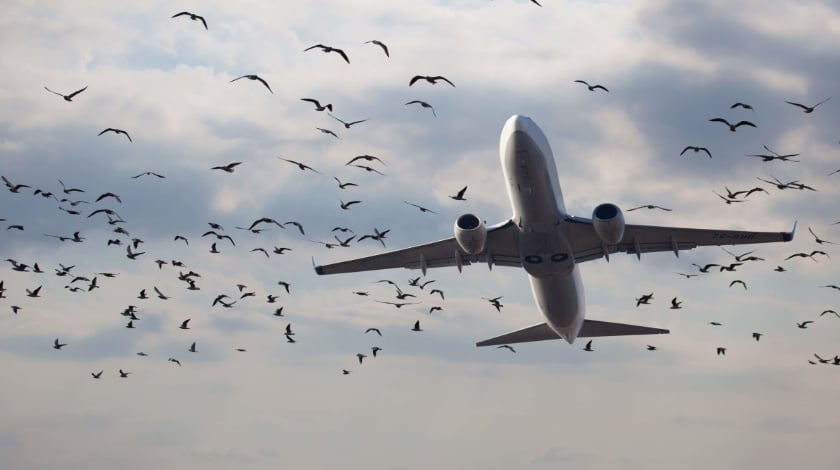 In the world of aviation hardly a week passes without an aircraft being damaged, and, as strange as it may sound, in many cases the fault of such problems lie in birds.

Perhaps, at first sight it does not seem to be a very weighty matter as it is thought that approximately 80% of bird strikes go even unreported and over 60% of the recorded bird strikes do not cause any serious damage to planes.

However, a phenomenal number of emergency landings performed particularly because of birds hitting the windscreen or flying into the engines make great concerns arise.

It should be taken into account that such casual collisions not only bear significant economic consequences (bird strikes cost the aviation industry about $900 million each year) but also complicate flight operations and, most importantly, put a threat to dozens of lives. Let’s explore the issue.

Issue As Old As Aviation Itself

Bird strikes started to occur as soon as first aircraft took into the air. It is believed that the first incident of this type was recorded by the Wright brothers in 1905.

Wrightstories.com provides a short extract from Orville’s journal saying that he “twice passed over fences into Bread’s cornfield. Chased flocks of birds on two rounds and killed one which fell on top of upper surface and after a time fell off when swinging a sharp curve.”

Therefore, one of the first fatal accidents with a bird involved dates all the way back to 1912, when a plane was hit by a flock of seagulls.

The pilot, Carl Rogers, who made history when he flew across the United States, was performing a demonstration flight when his Wright Flyer collided with the bird, which led to his downfall in the state of California.

Meanwhile, the worst bird strike in the aviation history occurred in 1960 when an Eastern Airlines propeller driven Lockheed L-188 Electra crashed into the sea while attempting to take off from Logan Airport.

62 people tragically lost their lives, with only 10 people surviving, after a flock of up to 20,000 starlings suddenly flew into the path of the aircraft, and hundreds of the birds were ingested into the engines. Consequently, two of the four engines lost power, a third flamed-out resulting in a quick crash.

Size Of Both Birds Matters

As we see, bird strikes were common since the beginning of aviation. Although statistics reveal that bird hits are not considered to be a major threat to a general level of safety, they still are lethal.

Bird strikes may occur during any phase of flight but are most likely during the take-off, initial climb, approach and landing phases due to the greater numbers of birds in flight at lower levels. Since most birds fly mainly during the day, most bird strikes occur particularly in daylight hours (according to the FAA, 63% of strikes).

Interestingly, it is noted that the biggest number of bird strikes happen between the months of July and October.

However, all the outcomes of a collision depend on the size and the place a bird strikes on the plane.

Talking about smaller, propeller-driven aircraft, most likely a collision with a bird might affect its structure; for example, it can harm windscreens of a flight deck, damage control surfaces or empennage. Therefore, windscreen penetration can easily end up with injury to pilots or any other passengers on board.

Whereas small aircraft mostly deal with structural damages, the most frequent and dangerous area a bird might strike directly into in larger jet-engined aircraft is the engine.

In case an animal reaches an aircraft power supplier, it can become a reason of engine malfunction in flight or even cause structural damage when the impact is huge. Especially, this unfortunate incident might be critical for such part of an engine as a first compressor rotor, the so-called fan blades.

Usually pilots are lucky not to meet any birds during flight; sometimes, though, they encounter a single bird on the way. However, current regulations allow pilots to continue the flight after a collision with only one bird if all the damages are fully removed and secure flight can be guaranteed.

Nevertheless, sometimes an aircraft cannot avoid a multitude of bird strikes caused by a flock of bigger birds that can trigger a failure in one or even more engines.

If several engines suffer from birds, all aircraft becomes vulnerable to loss of control which might result in fatalities.

Also, even though it is a rare case, sometimes bird strikes might happen at higher altitude. There can appear a structural damage to the aircraft hull which, in turn, can lead to rapid depressurisation.

Therefore, while bird strikes usually inflict most damage on the engines, all areas of an airplane can be damaged.

Bird Strike As A Tough Test For Aircraft Engines

Before passing ready engines to aircraft manufacturers, the engines are tested for bird strikes and their possible consequences.

Lufthansa Technik detailed that depending on the test procedure and the diameter of an engine’s air intake, the size and weight of the birds shot into the engine by a gas can vary.

For instance, during medium and small bird ingestion tests several birds are aimed simultaneously at critical regions of the fan blades and at the intake of the core engine, while a large bird ingestion test involves shooting a bird body weighing at least 3.65 kg at a speed of about 360 km/h into an engine with a minimum intake area of 3.9 m².

The impact of birds can also be simulated by using gelatine blocks. All test objects are shot into the running engine by a gas cannon with a speed of up to 500 kilometres per hour. This value is much lower than the usual cruise speed of jet powered aircraft, assuming that most bird strikes happen during takeoff and approach to the airport, where aircraft are much slower.

Although these aviation hazards are less severe than loss of control during flight or runway excursions, the matter should not be left aside.

Every single collision with a bird poses serious risks not only to financial stability of the aircraft owner, but also to general aviation safety, especially taking into consideration the fact that such incidents are expected to double over the next decades due to increasing air traffic, bird populations, and the trend to twin-engine aircraft.