IATA: Demand for Air Cargo Picks Up in June

This was the fastest pace of growth in 14 months. Freight capacity measured in available freight tonne kilometers (AFTKs) increased by 4.9% year-on-year, keeping yields under downward pressure.

Freight demand increased year-on-year in June across all regions with the exception of Latin America which recorded a 9.8% decrease, compared to the same period last year. The Middle East and Europe posted the fastest demand growth in June with year-on-year increases of 8.0% and 5.1% respectively.

“June saw an improvement in demand for air freight. That’s good news. However, we cannot read too much into one month’s performance. Air cargo markets have been in the doldrums for several years during which there were several false starts on indications for improvement. We will continue watching developments closely, keeping in mind that the air freight business environment is fragile. Global economic growth remains sluggish, world trade volumes continue to trend downwards and the industry faces heightened uncertainty in the aftermath of the Brexit vote,” said Tony Tyler, IATA’s Director General and CEO. 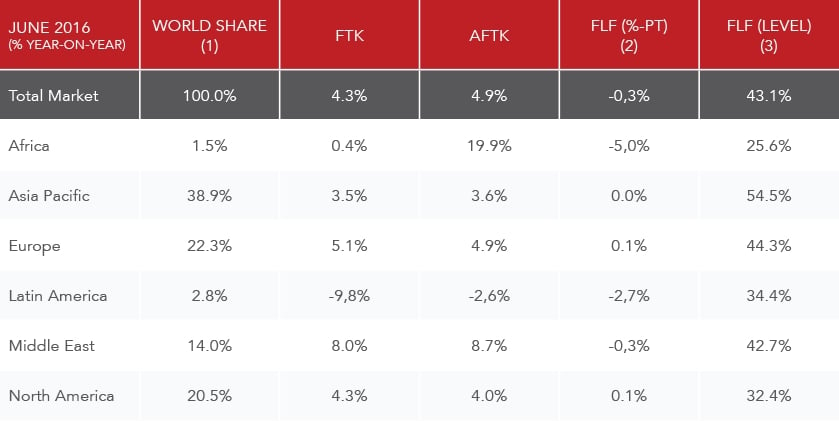 Asia-Pacific airlines reported a 3.5% increase in demand for air cargo in June compared to last year. Capacity expanded 3.6%. The Asia-Pacific air freight market has been improving in recent months, most notably the large ‘within Asia’ market. Nonetheless freight volumes from ‘emerging Asia’ continue to face headwinds from weak trade in the region and globally.

North American carriers saw freight volumes expand 4.3% in June 2016 compared to the same period last year. Capacity increased 4.0%. International freight volumes continue to suffer from the strength of the US dollar which has kept the US export market under pressure.

European airlines witnessed a 5.1% increase in freight volumes and a 4.9% increase in capacity in June 2016. The positive European performance corresponds with signs of an increase in export orders in Germany over the last few months. Seasonally adjusted freight results for Europe are now trending upwards.

Middle Eastern carriers posted the largest increase in freight volumes of all regions for the 16th consecutive month in June, 8.0% year on year. Capacity increased by 8.7%. Although the leader in market growth, the Middle East’s international freight growth rate (6.5%) for the first six months of 2016 is less than half the 14.3% average growth for the same period in 2015.

Latin American airlines reported a decline in demand of 9.8% and a decrease in capacity of 2.6%. The region continues to be blighted by weak economic and political conditions, particularly in the region’s largest economy, Brazil.

African carriers recorded 0.4% freight growth in June 2016 compared to the same period last year. African airlines’ capacity surged by 19.9% year-on-year on the back of long-haul expansion, continuing the trend seen since December 2015.