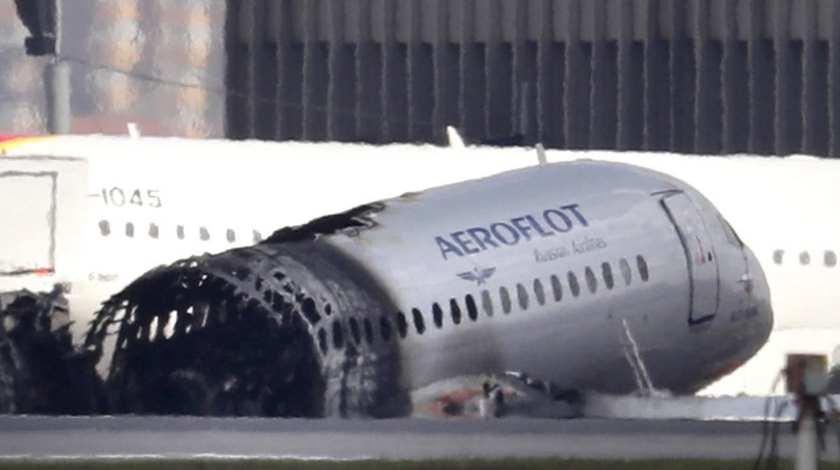 The calamitous effects of unexpected “atmospheric electricity” on its on-board computer systems turned a Russian-built Superjet 100 passenger jet into an uncontrollable flying incendiary device, according to details carried in a June 14 report from Interstate Aviation Committee (IAC).

Shortly after the Murmansk-bound SSJ100 flight took-off from Moscow, an overhead storm scrambled the aircraft’s on-board computer hubs, causing the autopilot to disengage activating the so-called ‘direct mode’ (manual) flight control and, at the same time, contributing to a total loss of radio communication, the IAC reports says.

The preliminary report on the investigation into the Aeroflot Superjet 100 RA-89098 crash at Moscow’s Sheremetyevo International Airport on May 5 reconstructs the series of events which led to the deaths of 40 out of 73 passengers and a flight attendant, as a result of a hard, heavy, multi-touchdown bounces and a subsequent fire.

The investigation confirms that, shortly after the Murmansk-bound SSJ100 took-off, it was “exposed to atmospheric electricity”. According to the IAC experts, it is likely this initiated a re-boot of the on-board computer hubs, which caused the autopilot to disengage, activating instead the so-called ‘direct mode’ (manual) flight control, as well as a total loss of radio communication.

The crew managed to restore radio communication on the emergency frequency and reported that they were returning to Sheremetyevo, the aircraft by now being operated manually.

But the report does not explain why the impact of atmospheric electricity had such serious consequences. Prior to this event, there had been 17 recorded instances of lightning strikes involving SSJ100s, but none of these had led to a direct mode switch.

The tragic Sheremetyevo event was the ninth case of an unplanned direct mode switch in the history of the type’s operation. Since 2015, the previous cases included direct mode switches on take-off (two), during climb (one), en route (two) and on-approach to landing (three).

Despite the radio communications issues and the loss of automatic control, the pilots told air traffic controllers that the situation on board was “routine”. However, since the aircraft had full fuel tanks, its weight was 42,600 kilos, which is 1,600 kilos above the maximum landing weight and, as a result, the vertical speed of the aircraft on descent was 1.8 mps, almost twice the allowable limit.

At a height of 490 metres, the crew received repeated warnings about possible wind shear ahead, but the aircraft continued to descend. At 82 metres the crew received a warning about deviating below glide path. Simultaneously, the commander increased engine revs, bringing the aircraft speed to 315 km/h, higher than recommended for such conditions.

On the first touchdown, the aircraft hit the runway at a speed of 293 km/h. Simultaneously the commander moved the control stick from ‘push’ to ‘pull’ and, as a result, the aircraft’s three landing gears touched the runway with 2.55 g force, below the allowable g-force for the aircraft’s structure.

After that, the aircraft billowed along a two-metre-high path and, since the commander was still holding the control stick at full nose-down position, the SSJ100 dived, causing a second touchdown that was even harder, with the nose landing gear hitting the ground at a speed of 287 km/h at 5.85 g.

Just before the final touchdown, the commander pulled back the control stick, a move that, in combination with the high speed, caused another bloat, to a height of five or six metres this time. At this point, the crew tried to increase the thrust in an attempt to abort the landing and go around. But this did not happen, because during the previous bloat the thrust reverser system had been activated, and its doors were still open.

The third contact with the runway occurred at a speed of 258 km/h and a vertical force of not less than five g. The main landing gear had already been partially destroyed during the previous touchdowns, which caused the further disintegration of the aircraft structure, leading to a fuel leak and fire.

The report states that flight recorders point to full or partial loss of engine control – the engines were running until the end of recording. Subsequent inspection of the aircraft showed that although the switches of the fire-fighting systems on both engines had been activated, fire-extinguisher bottles did not discharge.

The IAC has pointed out that it intends to run a simulation of the flight of the crashed aircraft using a full flight simulator.