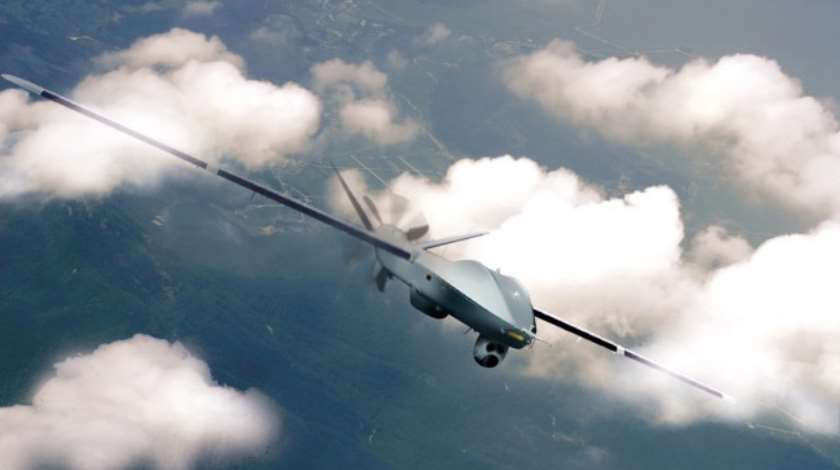 In May 2014, many South Koreans were struck by the discovery of three crashed drones in frontline areas that had been flown in from North Korea.

Albeit crude, the small devices had taken photos of major military installations on border islands, potential infiltration routes and the presidential palace in downtown Seoul, kindling concerns over a potential security breach and lax air defense.

Despite persistent controversy over civilian casualties from U.S. drone strikes, such as in Pakistan and Yemen, the killing capabilities, greater public acceptance and lower political risks have made the weapons more appealing for leaders, compared with the often drawn-out bloodshed of using conventional ground forces. They are also at the forefront of Washington’s ongoing campaign in the Middle East to eliminate the Islamic State extremist group.

With countries around the globe racing to roll out better performing unmanned aerial vehicles, South Korea is striving to strengthen its entry into the market.

On the military front, the Daejeon-based Agency for Defense Development began delving into the technology in the late 1970s, seeking to introduce a miniature air launch decoy codenamed Solgae (black-eared kite) with technical assistance from the U.K.

The project was called off by the Air Force in the mid-1980s before it could materialize, but did kick-off the Army’s drive to produce a battalion-level reconnaissance drone. In 2000, the ADD and Korea Aerospace Industries launched the country’s first homegrown UAV ― nicknamed the Songgolmae, RQ-101 or Night Intruder-300 ― and its deployment started two years later.

A fixed-wing UAV with a 200-kilometer range and 45-kilogram payload capacity, the aircraft is designed to serve various missions such as aerial and battlefield surveillance, reconnaissance, target acquisition and bombing guidance, transferring real-time images even in unfavorable environments.

State-run think tank and defense companies have since continued to study key technologies including those for autonomous takeoff and landing, multiple drone control and collision detection and avoidance. The government, for its part, has devised a road map to boost the industry in line with its mid- and long-term defense reform plans and as a fresh growth engine.

“From the envisioned division-level drone to stealthy combat aircraft, we are putting much of our input into UAV development based on our 20-years-plus of experience. It may sound new to the general public, but has a long history not just internationally, but also at home. We want to be a leader in the area as much as in other domains.” a KAI official says

The efforts, however, have hit numerous snags. Though restarted in 2013, an ambitious 2006 program for a propeller-driven, long-endurance mid-altitude UAV was nearly scrapped in 2011 in the face of criticism that it overlapped with Seoul’s plan to adopt Northrop Grumman’s RQ-4 Global Hawks high-altitude spy planes.

Currently, the ADD with KAI and Korean Air are respectively carrying out projects to develop division-scale UAVs. Another major prospective program is under way by the state-funded Korea Aerospace Research Institute and the national flag carrier, which has in recent years been expanding its foray into aircraft manufacturing, for a Predator-like surveillance and reconnaissance drone called the KUS-15. They have already completed developing a “smart, next-generation” UAV system consisting of tilt-rotor air vehicles capable of vertical takeoff and landing and sending real-time imagery information from distant places at all hours.

“The industry consensus is that the U.S.’ F-35 and F-22 will be virtually the last manned fighters,” said an official at the Korea Defense Industry Association. “With drones rising as a global trend, many firms are investing in their development, but the key is performance.”

Global spending on UAV programs is forecast to triple to about $14 billion over the next decade in military, commercial and consumer markets, with military research and development outlays set to add another $30 billion during the same period alone, according to a study released last August by Teal Group, a Virginia-based aerospace and defense market survey firm.

Drones were also a key feature at a defense trade show in Bangkok early this month, with France’s ECA Group, Israel’s Aeronautics, Thailand’s Avia and other companies showcasing their products.

“The market for UAVs looks very strong, increasingly driven by new technologies, such as the next generation of unmanned combat systems, and the development of new markets such as civil and consumer drones. Our 2015 UAV study calculates the UAV market at 72 percent military, 23 percent consumer, 5 percent civil cumulative for the decade,” he notes, adding that civil UAVs will likely post the fastest growth of the three, albeit from a relatively low based says Philip Finnegan, director of corporate analysis and coauthor of the study.

At a meeting with a national science technology advisory panel presided over by President Park Geun-hye last March, the Ministry of Science, ICT and Future Planning unveiled its goal of securing 10 percent of the international market for remotely piloted machines ― aerial, ground and maritime combined ― by 2025 by nurturing 650 related firms and helping them rake in 15 trillion won ($13 billion) in total annual revenue.

To that aim, Seoul is funneling millions of dollars into the initiative and refining regulations and administrative frameworks, while harnessing cooperation with other leading countries, including Israel. The two nations agreed in July 2014 to scale up their $2 million joint industrial research and development fund to boost technology sharing in UAV development and four other fields.

Under the current rules, operators of drones weighing over 150 kilograms are required to seek government approval before use, while lighter ones are subject to registration, with exceptions for military systems and noncommercial devices weighing 12 kilograms or lower.

As of July, 716 units are on the list, nearly a threefold jump from 2013, according to the Ministry of Land, Infrastructure and Transport. More than 582 businesses and 850 people have signed up as operators, up from 116 and 64, respectively, over the same period.

“A small-scale market once dominated by aviation experts and club members is now expanding to embrace amateurs and ordinary people who use drones for crop-dusting, filming, land surveys or other industrial purposes,” the ministry said in an analysis released in September.

Yet South Korea has a long way to go to become a major powerhouse, officials and experts say. They assess that the country ranks seventh in the world in terms of technological capabilities, falling behind the U.S. and other forerunners due to its lack of “core” know-how, professional manpower and infrastructure.

The weight-based standardized current regulatory regime also needs to undergo a comprehensive overhaul and include concrete yardsticks, such as for penalties for unauthorized flights or safety certifications, so as to help minimize the public’s safety, ethical and privacy concerns.

“While constant support for indigenous technological development and outside assistance is vital, we need to establish regulatory standards based on drone specifications, amend laws to allow realistic criteria for punishing for illegal operations, and craft rules for safety certification, mandatory insurance coverage and personal information protection,” a future planning ministry official said, requesting anonymity due to internal policy.