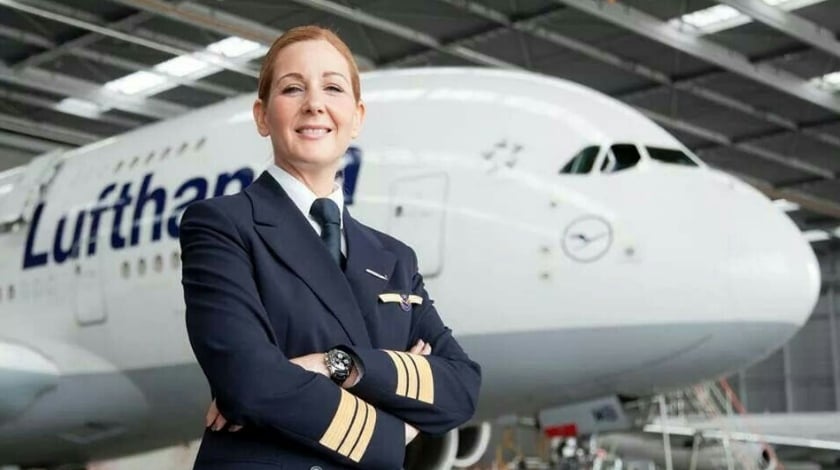 On 8 March, six all-female crews from Lufthansa, SWISS, Austrian Airlines, Eurowings and Brussels Airlines will start their morning rounds to Berlin on time for the International Women’s Day. The jets are flown from Frankfurt, Munich, Düsseldorf, Vienna, Zurich and Brussels by two female pilots each.

In order to send out another signal on this day, the FlyingLab on flight LH440 from Frankfurt to Houston is under the command of a purely female crew – in the cabin, in the cockpit and also in front of the camera. The A380’s in-flight conference will not only focus on the various aspects of digital transformation, but will also highlight the achievements of women in a technology-dominated environment.

A total of six speakers will talk about artificial intelligence, virtual reality and the future of work and mobility. The FlyingLab is the world’s only open innovation platform in the air. It consists of an on-board conference, which every passenger can follow on his or her own personal device and the opportunity to test the latest innovative products and services. The aim of this FlyingLab will be the South by Southwest (SXSW) – the world’s largest festival for interactive marketing, music and film that takes place annually in Austin, Texas.

„We have already been able to increase the number of female applicants at our pilot flying school by addressing applicants in a more targeted manner and by making it easier to combine family and work,”says Dr. Bettina Volkens, Member of the Executive Board for Human Resources and Legal Affairs of Deutsche Lufthansa AG. “15 percent of our junior pilots are currently female.”

As early as 1988, the first two women began their scheduled service at Lufthansa. In 2010, there was a premiere for the global airfreight industry: A freighter from Lufthansa Cargo took off with a purely female crew. Women in the cockpit are no longer rare.

Approximately six percent of the Lufthansa Group’s pilots are female and their share has risen steadily over the past few years. Approximately 80 percent of the cabin crew are female. For the growing number of female pilots, Lufthansa has had the word “Kapitänin” (“Captain”) specially approved by the Gesellschaft für deutsche Sprache.

„In order to meet these goals, we are preparing our best female junior executives for their future management responsibilities with our own one-year program,” says Volkens. At the same time, it is important to me to reduce unconscious bias when filling vacancies. A specially programmed video supports our hiring managers in selecting the right personnel for the right job.