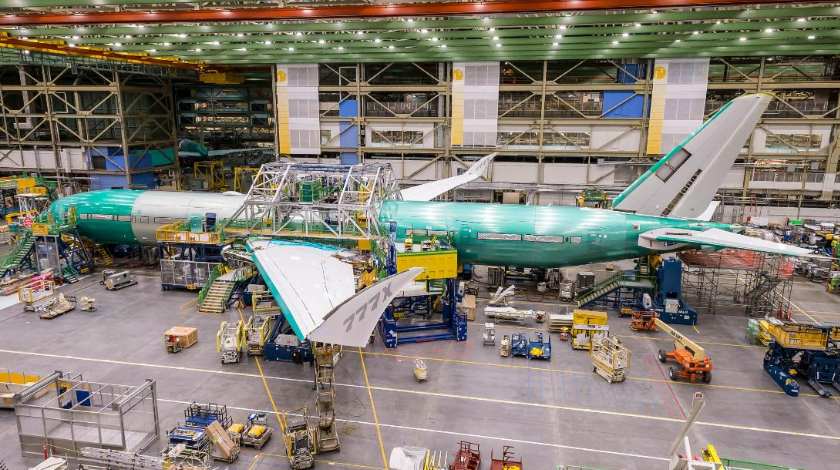 In the night from 14 to 15 February the final body join of the first Lufthansa 777-9 took place. All major fuselage parts inclusive the mid section, which prior to this got joined with the wings during the „Wing Body Join“, were assembled and you can easily guess what its 777-9 will look like. Only the engines are missing.

Markus Löhn, Lufthansa Group Representative at Boeing and member of the Lufthansa 777X Entry Into Service project team, is confident that the current schedule will be met and that the 777-9 will arrive in Germany with its new crane in July 2020.

As responsible LH Group Fleet Procurement focal for production supervision and deliveries of all Boeing models to the Lufthansa Group, he is closely monitoring the progress of production in Seattle.

The 777x series is based on the proven 777, which is already being flown by Lufthansa Cargo as a cargo version and by Austrian Airlines and Swiss as a passenger version. With a length of 76.6 metres and a width of 71.8 metres, the 777-9 far surpasses its predecessor and is currently the longest passenger aircraft in the world.

The extremely long and narrowly curved wings are mainly made of carbon fibre and thus contribute to lower kerosene consumption. With this wingspan, the Boeing 777-9 would no longer find a suitable parking position at every airport. However, the last three and a half meters of the wings can be folded up. So the 777-9 can be parked like a conventional 777.

Two GE9X engines power the new long-haul aircraft. In addition to the lightweight construction of the wings and the new wing design, General Electric’s new developments are a major factor in improving fuel efficiency by 20% compared to the 777-300ER. With an outer diameter of 4.4 meters, it is larger than the fuselage diameter of a 737.

The fuselage diameter of 6.20 metres is almost as large as that of a 747. The 777-9 has room for about 400 passengers, depending on the configuration. All seats are completely new developments.