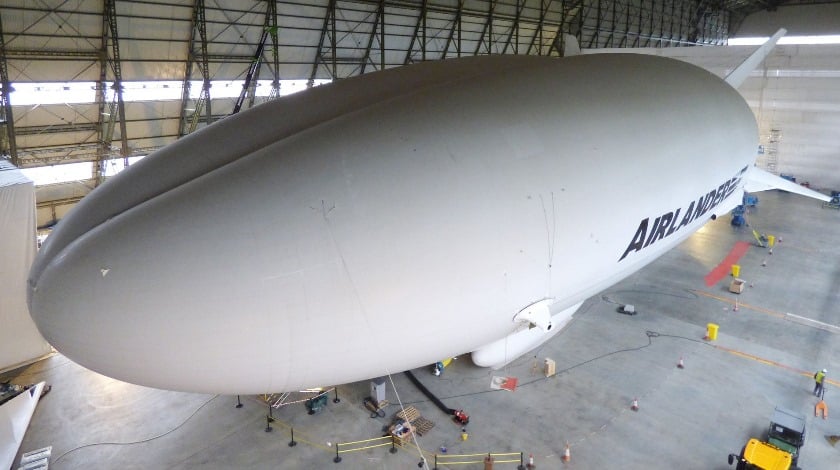 Enormous, unique and British-built, the Airlander 10 is on the verge of taking to the skies.

The fully assembled aircraft was unveiled, floating in its Bedfordshire hangar, on Monday: an airship-cum-plane pumped with a million cubic feet of helium, big enough to dwarf the largest jumbo jet.

The super-strength fabric of its hull holds four engines, fins and the flight deck. Months of ground tests are ahead but its creators hope the hybrid craft will fly over the UK this summer.

The 92-metre-long (302ft) Airlander’s shape gives it lift like a plane when propelled, and it can land and take off on most terrain or on water, on its pneumatic skids. Able to stay aloft for five days, it could potentially have civil, military and leisure uses: whether lifting machinery to remote areas, providing surveillance and communications, or carrying the super-rich.

Similarly ambitious craft were housed in these same Cardington hangars a century ago, culminating in the doomed R101 airship. But the Airlander, with its triple-layer weave of modern composites to keep in the gas, state-of-the-art controls and unique shape for manoeuvre and lift, hopes to prove an evolutionary step forward.

Prof Chris Atkin, the president-elect of the Royal Aeronautical Society, said the Airlander was “a new slant on a well-established idea, with very clever use of technology. It will be a very quiet and stable vehicle to travel in.”

Stephen McGlennan, the chief executive of the Airlander’s manufacturer, Hybrid Air Vehicles, said its applications range from the prosaic to the lifesaving: fitted out appropriately, it could be used as a cheap, flexible way of boosting mobile communications networks for sports events, or to help monitor refugees crossing the Mediterranean.

Beyond this prototype, there is a blueprint for a larger Airlander that could house entire suites of rooms within its hull. Backed by export guarantees from the British government, the firm’s early clients are likely to be in the Middle East, possibly Qatar.

McGlennan said: “We’ll be taking it out to those places and seeing it do the job. With something like this, seeing is believing – we need to show people.”

However great the commercial opportunities, the project has also been buoyed by enthusiasts, from investors to the aviation engineers, drawn to work on something completely different.

David Stewart, the head of flight sciences, previously worked for a supplier of one part for Airbus. Standing in the flight simulator he helped build, he said: “You get to muck in with everything, from making this to testing in the wind tunnels, or just scrubbing silicon from clamp rings.” The team, though, has gone from a couple of dozen to 130 staff after renewed investment.

A crowdfunding drive last year raised £2.1m, and a similar initiative is being launched next week. The Iron Maiden singer Bruce Dickinson plunged in £250,000 early on, while about £7m came from EU and UK research grants.

But the biggest effective donation came from the US defence department, which had invested £60m in development before government cuts hit. The US army returned the rights – and the deflated prototype – to Hybrid Air Vehicles for a relatively low price.

Sitting in the flight deck on Monday was David Burns, the chief test pilot, who flew the one, short, virtually unrecorded sortie of the prototype Airlander, conducted in secret at a US military facility in New Jersey in 2012.

A veteran of flying both Boeing jets and blimps, Burns said the experience combined the best of both: “Here I’ve got the view of an airship, but with the characteristics of a plane.”