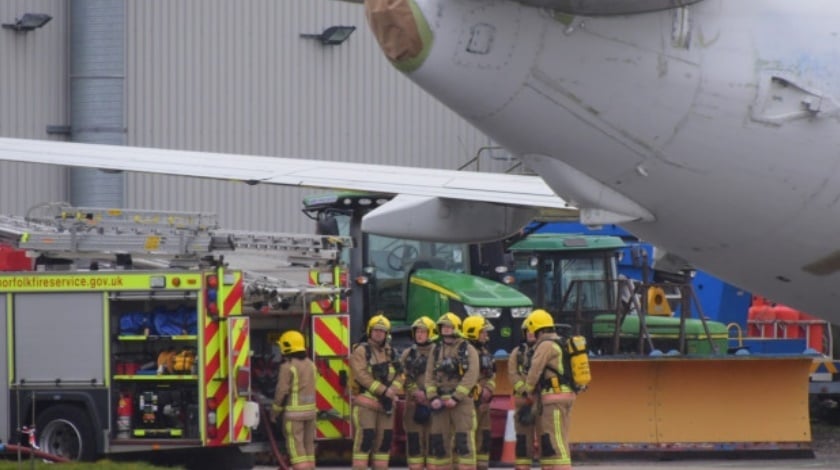 Teams of firefighters Daily Mirror plhave been battling a massive fire in an airport hangar that has up to 5,000 litres of aviation fuel inside.

The inferno started around 9.40am on Sunday at Norwich International Airport, Norfolk, but is not thought to be suspicious. As many as EIGHT fire crews were fighting the blaze armed with a water carrier, aerial ladder platform, control unit and welfare unit – as well as the urban search and rescue team.

There are no reports of any casualties and police confirmed they have been notified about the incident.

The fire is in the roof of a hangar, used by KLM Engineering and Air Livery, with two passenger aircraft inside. They have not been damaged, and Greg Preston, incident commander for the fire service, said that preventing the fire spreading to them was a priority.

There are contingency plans in place to take them out of the hangar if necessary, but the task would be complex because they are surrounded by scaffolding.

Mr Preston said: “We have currently got crews working at height using our aerial platform. We are removing the roof covering to extinguish the fire and to ascertain the extent of the fire spread. It’s very difficult access given the height of the building. It’s really difficult to access from the inside. It’s going to be a protracted incident. As we strip away the roof we will be able to see the extent of the fire.”

The roofing includes asbestos cement sheeting, but Mr Preston said there was minimal risk to the surrounding area. There are 15 fire appliances at the scene, and 75 firefighters.

The cause of the fire is unknown.