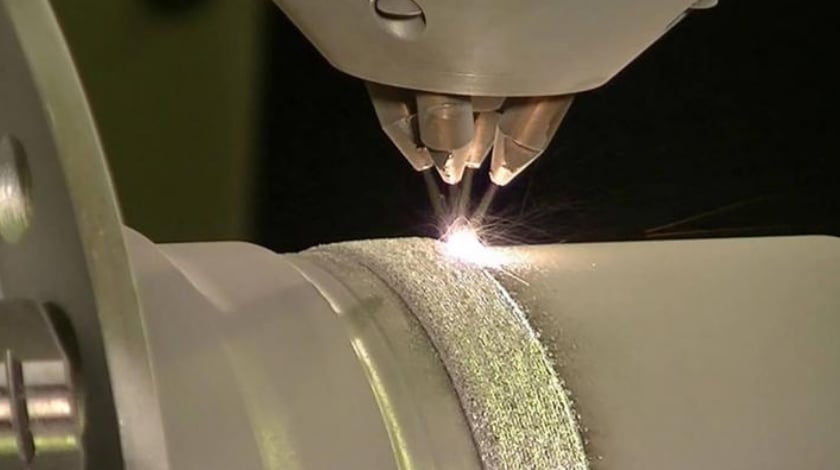 With a total staff of 82 people, the additive manufacturing firm Optomec is small, but it has some very big aviation customers, such as United Technologies, Boeing, Rockwell Collins and GE, which has invested in Optomec.

The company is bringing some very different additive metal technologies to aviation that could be especially useful in overhaul and maintenance, according to Marketing VP Ken Vartanian.

Speaking in a webinar sponsored by Michigan State University’s Department of Mechanical Engineering, Vartanian said Optomec has a unique and patented process for aerosol printing developed over 15 years. The process begins with atomized particles of 2-5 microns in diameter, using a wide range of materials, including conductive inks, polymers, adhesives and even biomaterials.

A mist of these droplets is compressed into a fine beam that is ejected from a nozzle at 70 meters per second onto the substrate, or the part onto which a very thin layer of the material is to be added. Aerosol jet is ideal thus for adding sensors and antennas to parts, making them ‘smart parts.’

One possible application is enabling condition based-monitoring of aircraft structures. Another application on which Optomec has been working for two years is adding sensors to engine turbine blades. These are passive optical sensors, made of ceramic ink, that must work under temperatures of up to 1,800 degrees Fahrenheit.

The turbine blade sensors detect metal fatigue and creep. They are scanned during the maintenance cycle, and data is downloaded to the engine-maker’s Internet of Things platform. So instead of replacing engine blades based on statistical probability of early failures, the OEM can identify and replace exactly the blades that actually need replacement. “For a few dollars per sensor, you can save thousands of dollars,” Vartanian observes.

Optomec has also taken the LENS techniques originally developed at Sandia National Laboratories in the 1990s and refined them into practical manufacturing and repair methods. Here powdered metals are blown into the focus of laser beams that deposit the metal to build up a part. Water-cooled lasers of up to 3 kilowatts are used to deposit up to a kilogram of metal per hour. The strength of the resulting part has been proved to be at least as good as that of cast or wrought metals of the same materials, for example titanium or stainless steel.

Powder Bed Fusion is better than LENS at building more complex parts and at getting better resolution, Vartanian acknowledges. But PBF is limited in the size of parts printed, while LENS is not. And LENS can build simple parts faster than PBF and cheaper as well, because it uses larger sizes of metal grain.

Moreover, the LENS technique is ideal for doing repairs, welding and coatings, Vartanian points out. With a shortage of 400,000 welders forecast for the U.S., the new technology may be especially helpful. LENS repairs of engine parts can also be economically attractive, avoiding major expenditures for purchase of new parts.

And Optomec is trying to make LENS equipment more affordable than the $750,000 to $2-million machines that have been available in the past. It is integrating its LENS technology as modules into conventional computer numerical control, or CNC, machines and developing ‘recipes’ for using LENS to ease training and deployment.

Vartanian remembers being a young engineer staring at a computer-assisted design (CAD) diagram on a PC screen and dreaming of just printing out that design. Now he can, and he wants to make the technology much more pervasive in manufacturing.