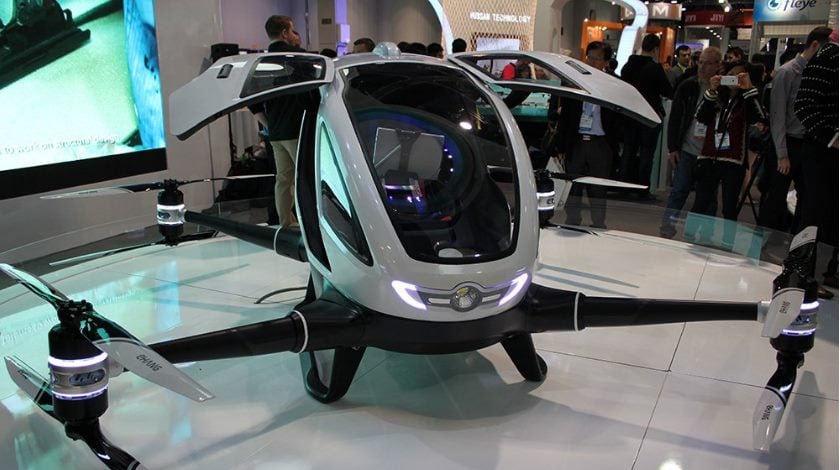 At the Consumer Electronics Show (CES 2016) this week in Las Vegas, a Chinese company named EHang introduced the first publicly announced unmanned aircraft designed to carry a passenger. The company calls its Ehang 184 an Autonomous Aerial Vehicle, or AAV for short, and it is designed for short hops at low altitudes.

The all-electric aircraft was designed with four arms and eight propellers for redundancy, hence the number designation (one passenger, eight propellers and four arms). The 184 is designed to take off and land vertically. It is controlled through a tablet app that allows the operator to plot a course for the UAS to fly, take off, hover and land by simply touching buttons on the screen and fixes on a moving map. The map also shows the course and location of the EHang 184 in flight.

The 184 is designed around redundant automation and safety systems, the maker says. It is capable of landing safely even with a propeller malfunction, the company said. In the event of a problem, the operator can either choose to hover or make an emergency descent with the touch of one button on the screen.

EHang is working on a low altitude command center that would stay in contact with the 184s. This command center would be capable of disabling the system in case of bad weather or other conditions that could prevent safe or legal flight.

Designed to stay below 1,600 feet, the EHang 184 has a maximum carrying capacity of 220 pounds and is capable of flying for 23 minutes at average speeds of about 55 knots. A full charge takes anywhere from two to four hours to complete. While these parameters appear limiting, the 184 would have real-life applications for commuters and there is no doubt that there is potential for this system to carry more to higher elevations at greater speeds.

As a reader of Flying you may ask: If it’s a single-seat aircraft, why not just fly it yourself? But the ease of flying the 184 would allow people to fly without the need for a pilot’s license, EHang says.
“It’s been a lifetime goal of mine to make flight faster, easier and more convenient than ever,” said EHang CEO Huazhi Hu. “The 184 provides a viable solution to the many challenges the transportation industry faces in a safe and energy efficient way.”

The success of the EHang 184, however, hinges on regulators being willing to allow people to fly autonomous aircraft without a regular pilot’s certificate.