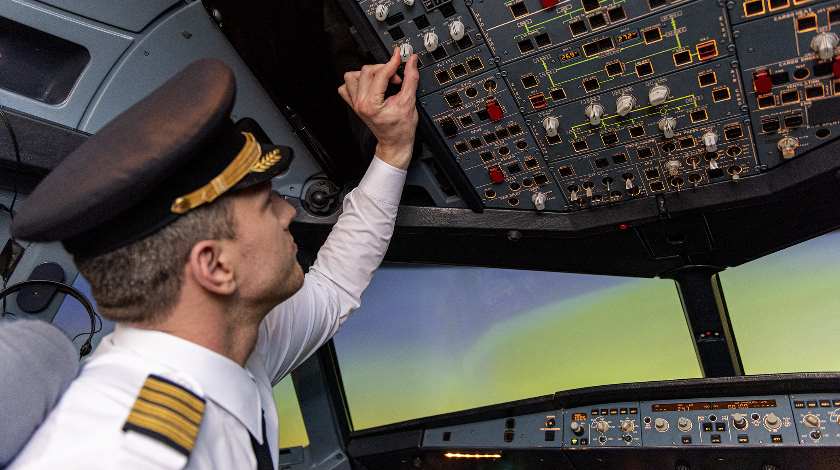 Airlines are facing an increasing pilot shortage worldwide. As a result, they are grounding the aircraft and cancelling flights around the globe. What is the real situation?

IndiGo, which is India’s largest passenger airline, grounded 10 Airbus A320-neo aircraft and cancels 30 flights per day due to several reasons including pilot shortage. In addition to this, the number of cancelled domestic flights in Australia reached 10,808 last year.

Flybe, European regional airline based in England, cancelled 10 flights at the beginning of April. Therefore, at the same time low-cost airline Ryanair, which operates over 1,800 routes and owns a fleet of 400 Boeing 737-800, reduced numerous flights among several destinations.

The situation across the Atlantic seems to be similar. The entire commercial airline industry is facing a shortage of pilots for both cargo and passenger planes. Estimates suggest that there will be 1,600 of unfilled pilot positions in the U.S. by 2020.

According to the Federal Aviation Administration calculations, the U.S. needs to train a staggering number of 87 new airline pilots every day for the next 20 years in order to meet the growing demand.

FedEx, the world’s largest airline by freight tonne-kilometres flown, is dealing with an impending pilot shortage. The Memphis-based carrier is expected to lose 150-200 of its 4,500 pilots this year and a similar number each year for the foreseeable future.

The issue is not new – 2 years ago Norwegian, one of the industry’s fastest expanding carriers, described crewing issues as a fundamental problem for the business and the airline group has already had to cancel flights at peak times in summer 2017 due to lack of human resources.

There are many more examples alike and the discussion of the looming pilot crisis is getting more and more serious and the current situation has already made an impact on the aviation business around the globe.

Numbers aside, the case is clear: the pilot shortage is real.

A Complex Of Shortage Reasons

The main cause of pilot drought is difficult to define as it is a complex situation influenced by a number of reasons. One of the main reasons for air transport demand growth may be economic growth and low-cost airline expansion.

Year-over-year passenger travel growth for the past five years has averaged 6.2 percent. Economic and income growth in large emerging markets such as China and India has been a primary driver of global GDP growth and also the demand for air travel. The middle class in both countries combined grew from 80 million in 2000 to 135 million in 2016, an increase of nearly 70 percent.

Pilot age and flight time limitations have a serious effect on the pilot shortage growth.

Most job opportunities arise from the need to replace pilots who retire and leave the workforce. Over the next 10 years, many pilots are expected to retire as they reach the required retirement age of 65. USA market faces the “Baby Boomer” pilot generation issue where these experienced pilots — almost 50% of the pilots flying today — are about to retire.

Furthermore, the flight time limitations set the requirements of minimum flight hour experience to fly for commercial airlines or first officer upgrade to captain as well as the daily pilot flight schedules.

In recent years, a growing trend has emerged: airlines are fishing for talented professional pilots. When one wins, the other loses: Asian airlines with a giant pilot demand headhunt Australian pilots and attract to work for them in the region described as one of the world’s fastest growing markets.

Facing the pilot shortage issue, airlines are being forced into strategic recruitment planning. Carriers such as Emirates and Australia’s Qantas Airways have poured resources into hiring, but struggled in recent months to use their jets as often as their business plans dictate because of training bottlenecks.

Career attractiveness and realistic financing for training have become crucial factors to attract young people who meet industry needs and get them to apply for the job. Therefore, airlines fund their future flight crew training with the intent of recruiting the next generation of pilots.

While some companies invest and establish in-house training, other companies sign partnership contracts and establish ATPL cadet programs with approved training centres to get qualified pilots who are able to meet the company needs.

Moreover, a special program – MPL – has been created. It is competency-based training with new attitude to pilot training which allows to prepare a pilot in just 14-24 months. Moreover, this training integrates airline procedures from the very first day.

The student when choosing the MPL program can be certain of their future job, an airline is able to monitor the student’s progress and get involved in any training phase while a training center is shaping its further expertise in the field by preparing new generations of aviators.

Although there is no reason why women could not enter the profession, the number of female pilots amounts to less than 5% of Europe’s pilots. Airlines have started thinking out of the box and took their look from “how to attract perfect candidates for the profession” and turned to women, thus more and more initiatives with study funding options are created to attract more female to the flight deck.

290,000 is the number of active pilots worldwide, according to one statista.com report. The latest trends show the rapid growth of the aviation industry: the numbers of new aircraft, passengers and flights are going up.

Following these trends, the airline pilot shortage issue will expand. International Air Transport Association states that global traffic is set to double in the next two decades with the biggest increase expected in the Asia-Pacific region, where almost 4 billion passenger journeys are expected.

Meanwhile, Airbus says that the demand will double the global fleet to 48,000 aircraft and will result in a need to source 540,000 new pilots. Even with Airbus’ more conservative number, the gap between the demand and the supply is vast.

The Boeing 737 is the best-selling commercial aircraft in aviation history, with over 15,000 aircraft ordered. By 1 January 2019, the total number of 737NGs ordered was over 7,000, 70% of which were for the -800 series. Taking the production backlog into consideration, even with the rise in production rate to 52 per month in 2018, if there were no further orders, this would ensure the 737’s production until 2027 at least.

airBaltic to Take off after the Crisis without Boeing 737 Aircraft