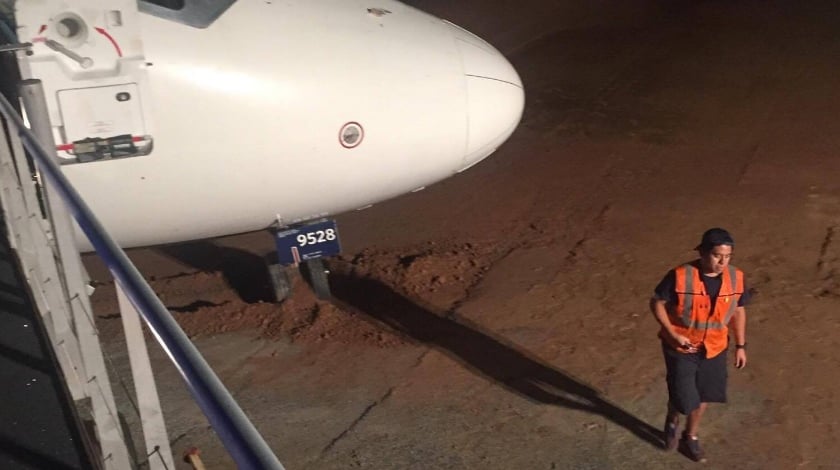 A plane at the Asheville Regional Airport got stuck in mud after landing Sunday.

Airport officials say 106 people were on Delta flight 2492, which was traveling from Atlanta.

Airport officials said that around 10:30 p.m. Sunday night the pilot was taxiing and tried to use a taxiway connector that is under construction when the plane got stuck in mud.

According to the airline’s website, the plane arrived from Atlanta just after 10 p.m., but passengers did not make it to the terminal until just after 11 p.m.

One passenger said firefighters were called to help them get off the plane because the front entrance could not be accessed.

“They couldn’t put the regular door bridge down in the front of the plane for the fact that it was in the mud,” passenger Jeff Lohser said.

Airport officials said it took about three hours to move the plane, and the airfield was closed during that time.

The airfield reopened just before 1:30 a.m.

Officials said the incident impacted eight other flights through delays, diversions or cancellations.

After arrival and during taxi to the terminal, the nose landing gear of Delta flight 2492 from Atlanta to Asheville, left the paved surface. Customers were deplaned via air stairs and bussed back to the terminal with Delta’s apologies for their experience and a gesture of service recovery. The safety of Delta’s customers and crew is always our top priority.