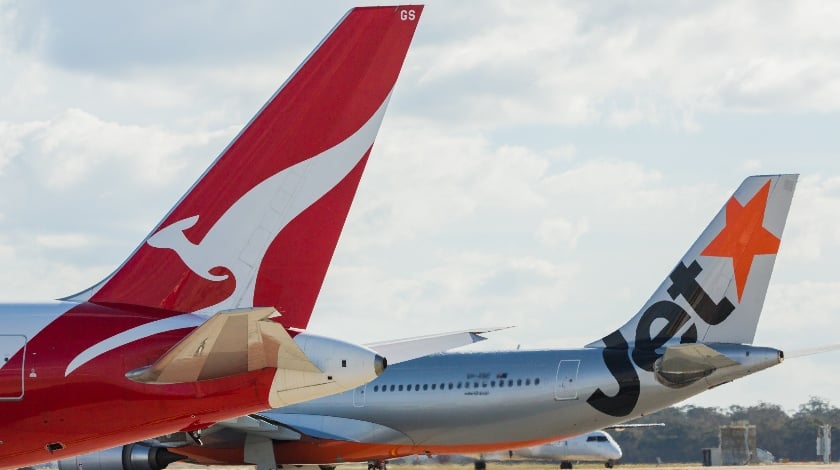 The record performance is a 57 per cent per cent improvement on financial year 2015. It means Qantas can resume dividend payments, reward 25,000 EBA-covered employees with a one-off cash bonus, and continue investment for customers, including extending wi-fi to Qantas’ regional and international fleets and finalising the network and customer experience for the Qantas Dreamliner.

Return on invested capital was 23 per cent, compared with 16 per cent at 30 June 2015, and earnings per share almost doubled to 49 cents.

The Qantas Transformation program continues to reshape the Group’s cost base and ability to generate revenue. It has unlocked $1.66 billion in permanent cost and revenue benefits since early 2014, including $557 million in financial year 2016, and is now outperforming, with the Group expecting to realise $2.1 billion in benefits by June 2017.

Effective fuel hedging saw the Group secure a $664 million benefit from lower global fuel prices compared with financial year 2015, passing a proportion of these savings through to air fares – which are up to 40 per cent lower than a decade ago in the Australian market.

The Group’s financial position improved significantly during the year, with $2.8 billion in operating cash flow used for capital expenditure, shareholder distributions and debt repayments, and excess cash used for refinancing.

Chief executive Alan Joyce said the result demonstrated the success of Qantas’ strategy to build a strong, sustainable future for the national carrier.

“Our transformation program is paying dividends for our shareholders, our customers and our employees,” Mr Joyce said. “Our people can be incredibly proud of what they’ve achieved. It’s thanks to their skill and commitment that we’re announcing a record profit today.

“This was a true team performance, which shows that our strategy is the right one for the tough markets we’re operating in and the long-term opportunities we see ahead of us.

“Transformation has made us a more agile business, created value for our shareholders and given us a platform to invest for the future. Qantas is stronger than ever, but we’re also determined to keep changing and adapting so that we can succeed no matter what environment we’re in.”

The Qantas Board has declared a fully-franked final ordinary dividend of 7 cents per share – or $134 million in total – to be paid on 12 October 2016. In addition, Qantas will carry out a further on-market share buy-back of up to $366 million, subject to shareholder approval.

Where there is surplus capital in future the Group will first distribute to shareholders via an ordinary dividend, in conjunction with share buy backs, special dividends or a capital return should additional surplus exist. Future dividends will be partially franked or unfranked, until Qantas’ franking credit balance – which will fall to $26 million after the current dividend is paid – increases.

In recognition of their outstanding contribution, around 25,000 personnel across the Qantas Group will be eligible for a one-off $3,000 Record Result Bonus (on a full-time basis) if they are covered by an EBA that includes the 18-month pay freeze outlined as part of the Qantas Transformation program.

Combined with the bonus announced in July 2015, this now means more than $160 million in cash rewards has been set aside for non-executive employees in the past two years.

The costs of the discretionary payment will be recognised in financial year 2017, outside of underlying earnings.

Over the past 12 months Qantas has announced new investment in eight Boeing 787-9 Dreamliners for Qantas International, super-fast inflight wi-fi for Qantas Domestic, and new lounges in London Heathrow and Brisbane, in addition to the refresh of Qantas’ Airbus A330 and Boeing 737-800 fleets.

The Group confirmed today that:

“Throughout our transformation we’ve invested in the areas that matter most to our customers,” Mr Joyce said. “We’ve renewed our aircraft, lounges, technology and the training we provide for our people, who’ve done a phenomenal job to earn record customer satisfaction.

“Today’s result means we can build on those investments, with some really exciting projects in the pipeline to make the experience of flying with Qantas even better. Our plans for the Qantas Dreamliner, in particular, will set new standards for the industry.”

Qantas’ performance in financial year 2016 reflects the advantages of the Group portfolio, with approximately two-thirds of its earnings generated from its strong, stable domestic and loyalty businesses, and approximately one-third from its international business – increasing potential earnings and resilience to volatility.

The business continued to navigate the transition in the Australian economy, with a $121 million drop in revenue from resources markets but higher revenue in non-resources markets, and capacity reductions limiting the impact of weaker demand at the end of the year. Operating margin was up 1.9 points to 10.1 per cent.

Customer satisfaction was at record levels, helped by upgrades to Qantas’ A330 and B737 fleets and continuous investment in service training.

Qantas International reported record underlying EBIT of $512 million, up 92 per cent on last year and an improvement of more than $1 billion compared with its result in financial year 2014.

The business continued to reduce costs and increase revenue while growing capacity to meet demand through a 5 per cent rise in aircraft utilisation. Unit costs excluding fuel were down 4 per cent and operating margin was up four points to 8.9 per cent.

With business travel and tourism strengthening in Asia, Qantas International has re-allocated capacity from trans-Pacific routes and the domestic market to destinations including New Zealand, Singapore, Hong Kong, Japan, the Philippines and Indonesia. Overall capacity on the Pacific routes has been increased under an expanded partnership with American Airlines, which saw Qantas return to San Francisco and American to Sydney and Auckland.

This agile approach to growth will continue in financial year 2017, as the Group monitors broader economic conditions, while continuing to deepen strategic partnerships with American Airlines, Emirates and China Eastern.

The Jetstar Group reported record underlying EBIT of $452 million, up 97 per cent.

Operating margin for the Jetstar Group in financial year 2016 was up 5.8 points to 12.4 per cent, helped by a 3 per cent reduction in unit costs (excluding fuel).

After completing the renewal of Jetstar’s long-haul fleet with Boeing 787-8 Dreamliners, investment is focused on continuing to improve the airline’s customer experience and online sales channels.

The Jetstar airlines in Asia delivered an $85 million improvement on last year. This improved performance included a first full-year profit for Jetstar Japan, which today announced plans to grow from 20 to 28 aircraft over the next three years, building on its success since launch in 2012 and supporting ongoing domestic and international growth.

Approximately 45 per cent of the business’ revenue growth in the year came from non-core ventures, while the core consumer and business loyalty programs continued to perform strongly.

Qantas Frequent Flyer members increased by 580,000 to 11.4 million and a range of improved products and partnerships have been announced. An expanded arrangement with Woolworths increases opportunities to earn Qantas Points on every dollar, including grocery and fuel purchases.

Loyalty continues to invest in new ventures and grow the scale of existing ones, taking a strategic stake in Data Republic – a secure data sharing platform – alongside Westpac and NAB, and launching Qantas Assure, a health insurance venture with nib.

Qantas Freight reported underlying EBIT of $64 million, down 44 per cent on last year.

The result reflects difficult global cargo markets and the end of favourable legacy agreements with Australian Air Express, impacting yields. However, the business is well-positioned for the future. New long-term deals with Australia Post and Toll, the country’s two biggest freight customers, are in place in the domestic market. Qantas Freight is also pursuing new opportunities internationally, in particular on triangular Australia–China–US routes.

The Group remained in an optimal capital structure throughout the year, with net debt within the Group’s target range of $4.8 billion to $6 billion.

Total Group short-term liquidity is $3 billion, including $2 billion in cash and $1 billion in undrawn facilities. The Group’s unencumbered asset base is valued at more than US$3.9 billion.

The Group is planning for capacity growth of 2-3 per cent in the first half of financial year 2017, driven by increased aircraft utilisation:

The Group is planning for the mixed domestic and international operating environment to continue in the first half. Unit revenue is expected to be below the first half of financial year 2016, with competitive industry pricing and resources sector weakness. This will be offset by a total unit cost improvement from the Qantas Transformation program and lower fuel costs.

Mr Joyce said: “The Qantas Group expects to continue its strong financial performance in the first half of financial year 2017, in a more competitive revenue environment. We are focused on preserving high operating margins through the delivery of the Qantas Transformation program, careful capacity management, and the benefit of low fuel prices locked in through our hedging.

“The long-term outlook for the Group is positive, with clear strategic priorities and a robust financial framework to deliver for our customers, our people and our shareholders.”

The Group’s current operating expectations for financial year 2017 are as follows:

Having regard to industry and economic dynamics, no Group profit guidance is provided at this time.