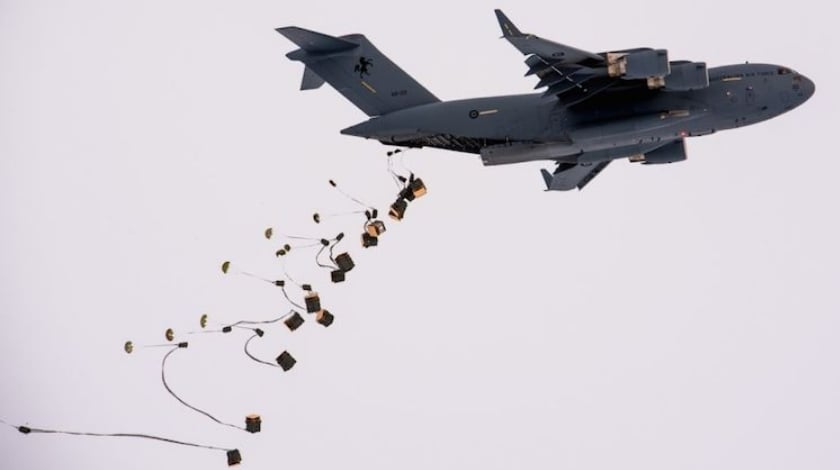 The Royal Australian Air Force (RAAF) has conducted an air-to-air refuelling over the sub-Antarctic region for the first time to deliver about 10,500kg of cargo to researchers at Australia’s Davis Research Station.

A RAAF C-17A Globemaster III conducted the air drop on Wednesday, taking off from Melbourne Avalon Airport carrying fresh food such as carrots, lemons and potatoes, as well as medical supplies and mail, to the team of 17 that has spent the past six months at the station.

Halfway through the journey to Antarctica, it was refuelled by a KC-30A Multi-Role Tanker Transport while flying over the Southern Ocean, as Flight Lieutenant Justin McFadden explained on the Australian Antarctic Division website.

“We refuelled about three hours into the flight at an altitude of 22,000 feet and a speed of 500 kilometres per hour,” said FLTLT McFadden, who captained the C-17A.

“This allowed us to continue the remaining four hours to Davis for the airdrop and return to Hobart.

“Nearing the drop zone, we descended to 5,000 feet and slowed to about 270 kilometres per hour, before deploying 15 pallets of cargo in padded containers, each weighing about 700kg.”

The Australian Antarctic Division published a video of the air drop on its YouTube channel.

The Australian Antarctic Division said the mid-air refuelling capability would allow airdrop supplies to be made year-round if required to all of its Antarctic Research Stations and deep into the interior of Antarctica.

“It’s hoped, in the future, this capability will allow us to pre-position equipment and supplies for station and science projects before the shipping season starts, so it’s all ready to go when the first summer expeditioners arrive,” Australian Antarctic Division future concepts manager Matt Filipowski said.