Real Benefits to Aviation from a Virtual Source 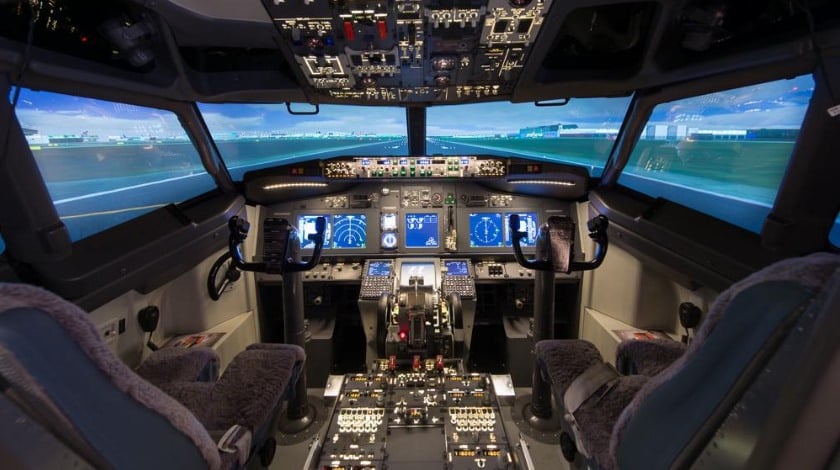 In the purest sense, virtual reality is already implemented effectively in flight training through the use of full motion simulators. Usually as the final step in training before a pilot enters the cockpit of a commercial airline they will have spent a number of hours in a fully immersive FFS level D certified simulator – the closest piece of training equipment available outside of an actual aircraft.

While level 5 flight training devices are the most common, the FFS level D simulator is by far the most advanced. These simulators offer 6 axes of rotation so in addition to roll, pitch, and yaw they also allow users to experience the effects of turbulence thanks to the use of hydraulics in their operation.

These systems can cost upwards of 10 million EUR and have high operating costs, but are still a valuable investment when compared to the cost of operating an actual aircraft.

Aircraft mechanics using an augmented reality headset will be able to look at an engine and be able to see both the physical engine itself and an overlaid virtual heads up display, which could be used to provide additional information about the engine. This benefits the mechanic by still being able to interact with the real world while at the same time experiencing the benefits of virtual reality.

Augmented reality has the greatest potential for growth in the aviation industry as it has applications for training and in real world use. Multiple companies are capitalizing on this technology and producing hardware to help pilots while they are in cockpit by enhancing the information that is being displayed.

The vision for the future of augmented reality is one that even in zero visibility weather a pilot will be able to see a digital creation of his approach and glideslope and will still be able to clearly see the runway.

Even in good weather, pilots will gain an advantage. Other air traffic that might be otherwise hard to find can be highlighted for greater visibility. The borders of different types of airspace can be clearly displayed so the pilot does not make a mistake and infringe on airspace that should have otherwise been avoided.

By 2035, there will be an estimated shortage of 617,000 pilots. To prevent this shortage from becoming a reality there will need to be 32,000 new pilots per year from 2016 until 2035. “This new generation who are replacing the retiring pilots will be entering the industry equipped with technology that has previously only been dreamed of,” says Chairman of the Board at Avia Solutions Group Gediminas Ziemelis.

Any disruption to the piloting workforce causes massive losses to the airlines. The recent pilot rostering error at Ryanair has cost the airline over €35 million in compensation payouts and other costs. The solution to piloting strikes, airline trained and employed substitute pilots will also be part of the solution to prevent the looming piloting shortage.

“Cutting edge training technology combined with a smart business strategy is how we will keep our planes flying for our passengers and keep our airlines profitable,” says Gediminas Ziemelis.

Despite what the name conveys, virtual reality is very real and visceral. What was once just a novelty technology is now making a difference in how the industry thinks about aviation. The viability of virtual reality and augmented reality is at an all-time high. Now that technology has caught up to the visionaries the early investments and proof of concepts are paying off.

“There are more than 1800 flight schools in world and all of them are looking for a competitive advantage to attract more students. There is no doubt that in the future as this technology matures and more novel ways of using it in the cockpit and on the ground are developed that more flight schools will be turning to it for an advantage,” says Gediminas Ziemelis. “The question that now remains is not if, but instead how much space virtual reality will occupy in the training market cap,” he says.