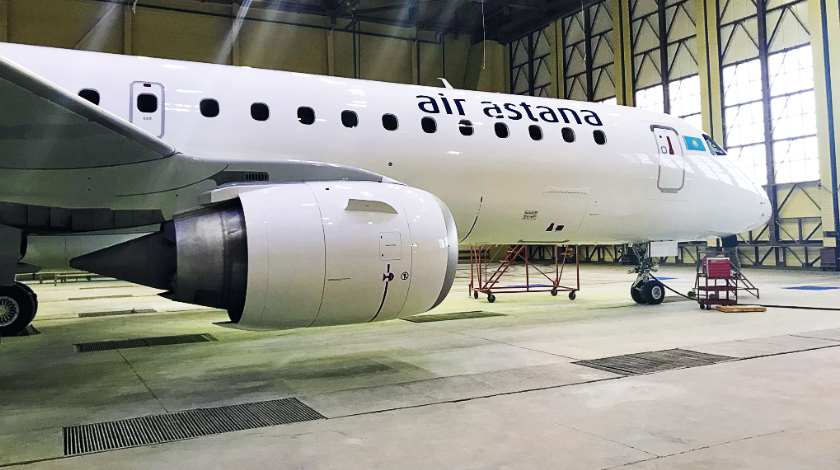 S7 Technics’ Mineralnye Vody-based aircraft painting centre has completed its first work on an Embraer aircraft. Air Astana dispatched one of its Embraer E190s to Mineralnye Vody for a planned refreshing of its paint under a long-term contract with S7 Technics.

The aircraft is the fifth in Air Astana’s fleet to have been painted by S7 Technics. To work on its first ever Embraer E190, S7 Technics’ painting centre made extensive preparations, which included pre-ordering all painting materials, sealers and removers.

“For us, any order is individual and there are certain peculiarities in painting an Embraer aircraft. For instance, after completing the painting work it is necessary to apply a polyurethane coat on the wing and stabilizers to protect the paint during operations. There are many such details, and our team was always in contact with Air Astana, to cater for all details of the technological process and complete everything on time,” says Denis Sarbin, S7 Technics’ sales manager.

The ongoing cooperation in terms of aircraft painting between the Kazakh carrier and Russia’s leading MRO services provider started in the spring of 2016. Since then, besides the E190, S7 Technics’ painting team has redelivered a Boeing 757-200, an Airbus A320 and two Airbus A321s to Air Astana. By the end of 2019 the Mineralnye Vody shop will have painted several other aircraft for the airline.

“Air Astana pays a lot of attention to the technical condition of its aircraft and sustains high standards of maintenance,” comments Air Astana. “Our Embraer 190 received a new livery and was painted using an advanced technology developed by AkzoNobel, a global leader in aircraft paints.

This technology allows for the reduction of emissions of hazardous materials into the environment during the repainting process, whilst also producing a durable coat with extended service time, which helps reduce operating costs. S7 Technics’ Mineralnye Vody painting centre demonstrated good results both in preparation and in the realisation of the project,” it adds.