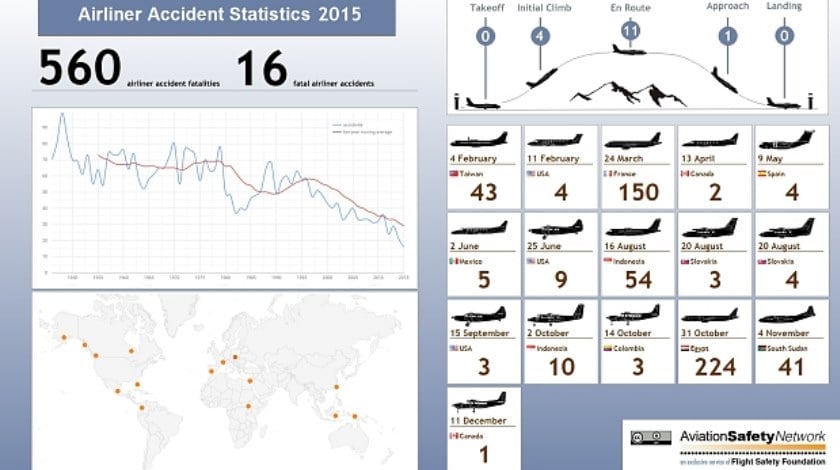 Last year was the safest ever for flying, with an accident rate of just one in five million. But which was the deadliest year on record?

With two high-profile disasters resulting in the deaths of 374 people, one could be forgiven for thinking that 2015 was among the deadliest years in the history of aviation.

Far from it. The crashes of a Germanwings A320 in March, deliberately caused by the co-pilot Andreas Lubitz, and a Metrojet A321 in October, due to a suspected bomb, account for the vast majority of last year’s aviation fatalities. According to the Aviation Safety Network (ASN), there were 14 other fatal crashes in 2015, resulting in 186 deaths, making a total of 560. Take away those two deliberate crashes, and it would have been the least deadly year for aviation since ASN’s records began. Indeed, when you count up the number of accidents resulting in fatalities, 2015 was the safest ever year for flying. 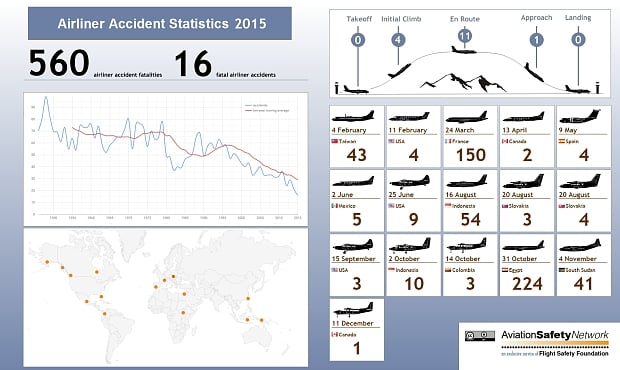 What about 2014? With a string of disasters involving Malaysia Airlines (two crashes and 537 deaths), AirAsia (162 deaths), Air Algerie (116), TransAsia Airways (48) and Sepahan Airlines (39), surely it must be a contender for the worst year? The total for 2014 of 990 deaths was the highest for a decade, but some way off the record. It should also be noted that there were only 21 fatal accidents that year, the lowest on record (until 2015, that is).

To find the deadliest year in aviation history, one must go back to 1972. That year saw a remarkable 2,370 deaths and 72 fatal accidents. There were 11 crashes that saw at least 100 perish, including four Aeroflot flights, and others involving Iberia, Sterling Airways, Alitalia, British European Airways, Interflug, Spantax and Eastern Air Lines.

Fearful fliers should be grateful the Seventies are over. The following year, 1973, was the second deadliest year on record, with 69 fatal crashes and 2,028 deaths. The carriers involved in the biggest disasters that year included Royal Jordanian, Libya Arab Airlines, Invicta International Airlines, Varig and Pan Am. And, of course, Aeroflot, which had a staggering 17 crashes that year.

And 1974 was the fourth deadliest year, with 1,989 fatalities from 68 crashes (eight involving Aeroflot). It should be noted that safety standards have improved drastically at the Russian airline since then – it hasn’t been involved in a fatal accident since 1996.

During every year in the Seventies, there were more than 1,000 deaths, making it comfortably the deadliest decade on record (16,766 – more than twice as many as during the 2000s).

According to Flightglobal, another aviation industry analyst, there was an accident rate of just one in 5 million flights during 2015, the lowest figure on record.

“If the improvement on air safety since 2010 is maintained for the rest of the current decade, it will equate to some 4,400 fewer passenger and crew fatalities than during 2000-09,” it said in a report, released yesterday. “For the first time last year, not a single passenger fatality was recorded on a Western-built jet, excluding those from suspected acts of violence. This was achieved against the background of the global Western jet fleet’s transporting 3.7 billion travellers and conducting 32 million flights.”