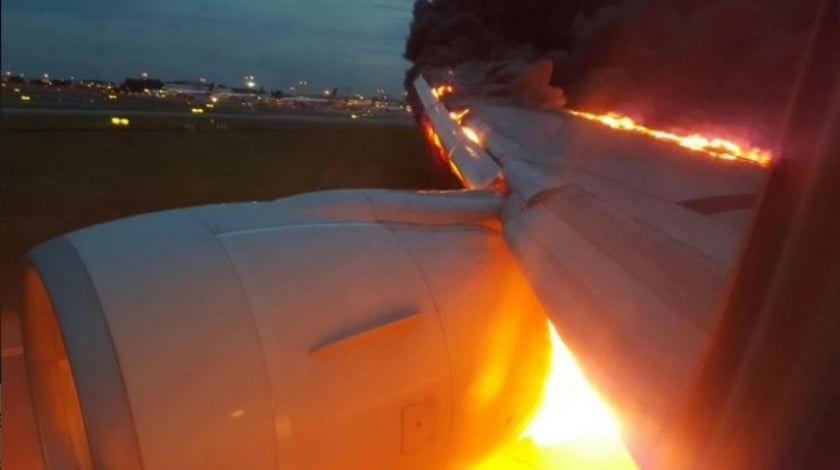 A Singapore Airlines flight to Milan caught fire early Monday morning while making an emergency landing in Singapore, but all passengers on board escaped unharmed.

Flight SQ368 departed Changi Airport for Milan at 2.05am on Monday. The flight was forced to turn back to Singapore after an engine oil warning message, SIA said in a statement.

The plane’s right engine caught fire after the aircraft, a Boeing 777-300ER, touched down at the airport at around 6.50am, SIA said. Firefighters put out the fire and there were no injuries to the 222 passengers and 19 crew on board.

Changi Airport also issued a statement saying that the fire was extinguished “within minutes” by the Airport Emergency Service team, which was already on standby.

Passengers told Channel NewsAsia that the flight turned back nearly two hours after taking off due to a fuel leak.

Ms Lee Bee Yee, who was onboard the flight with her husband, said there was a strong smell of fuel on the plane.

“The pilot said he was going to turn back because the engine is leaking oil on the right side. The captain said that they cannot turn on that side of the engine or else the plane will be vibrating. And they can’t fly like this to Milan…That’s why they turned back,” she said.

“We were sleeping and didn’t think too much about it,” she added.

After the plane landed in Singapore, the passengers cheered and clapped. Then, there was a spark and there were “huge flames” coming from the right side of the plane, she said.

Mrs Mamta Jain, whose husband Amit Jain was on board the flight, told Channel NewsAsia that the right wing of the plane burst into flames after the plane landed.

“When they landed, he said the engine was on fire and he could see flames. They were all inside the plane and they could see the right wing burning,” she said.

It was an agonising five-minute wait for the firefighters to arrive, she said. After they arrived, firefighters sprayed foam and water on the plane and the fire was put out in about five to 10 minutes, she said.

“Passengers disembarked through stairs and were transported to the terminal building by bus. Passengers will be transferred to another aircraft which is expected to depart for Milan later today,” the SIA statement said.

Three passengers opted not to board the alternative flight, an SIA spokesperson said. “We have been in touch with our customers to provide assistance with their travel plans and have offered them the option to defer their travel.”

Ms Lee told Channel NewsAsia that passengers were given the option to defer their flight or to take an alternative flight. Those who chose not to fly would be put up at a hotel arranged by SIA, while those staying in Singapore could return home and the airline would reimburse their taxi fare for both ways, she said.

Ms Lee said she decided to defer her flight, and to “go home and hug her kids”. SIA’s handling of the whole process was “very smooth, very good”, she added.

The plane has been towed away, and the clean-up of the affected runway is underway, Changi Airport said.

The airline said it will be cooperating with the authorities in their investigations.

SIA’s only accident resulting in casualties was a flight from Singapore to Los Angeles via Taipei, where it crashed on Oct 31, 2000 into construction equipment on the Taiwan Taoyuan International Airport after attempting to take off from the wrong runway. The crash killed 83 of the 179 people on board.