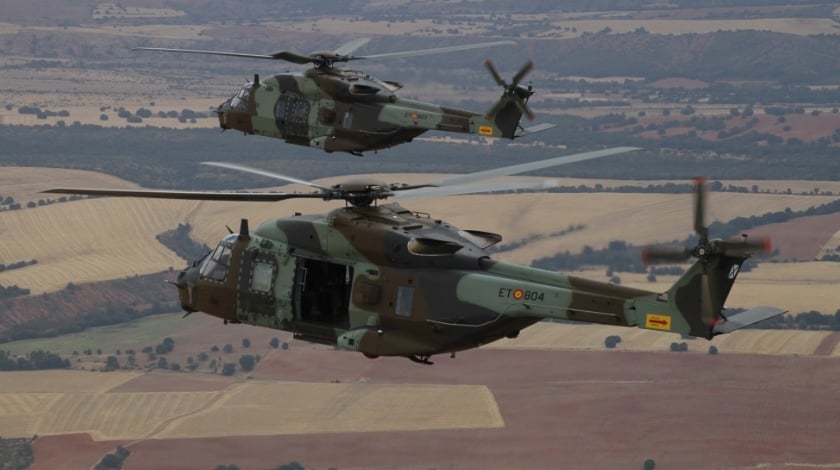 The Directorate General of Armament and Equipment (DGAM) completed the transfer of the first two NH90 tactical transport helicopters from the Airbus Helicopters plant in Albacete to the Spanish Army.

The handover was made at the Coronel Maté Air Base in Colmenar Viejo, the headquarter of the Spanish Army Airmobile Force (FAMET) and marked the entry into service of the NH90 within the FAMET. The ceremony was conducted by Lieutenant General Juan Bautista García Sánchez, the head of the Spanish Army’s Logistic Support Command Center, who was accompanied by a number of civil and military dignitaries.

The NH90s, which the Army has renamed HT-29 Caimans, will form part of FAMET’s Third Manoeuvre Helicopter Battalion (BHELMA III), based at the Héroes del Revellín Barracks in Agoncillo.

A third helicopter was already transferred earlier this month to the FAMET and is stationed at the Agoncillo base, where it is performing training missions. Two additional NH90s will be delivered by Airbus Helicopters by the end of the year, making it five aircraft handed over in 2016. In total, the company will supply 22 NH90 helicopters to the Spanish Armed Forces, under a delivery schedule that runs up to 2021.

Promoted by the Spanish Ministry of Defense, supported by the Ministry of Industry and managed by the DGAM, the NH90 program is the first that aims to meet the operational needs of the three branches of the Spanish Armed Forces.

It is based on a common platform adapted to the requirements of each mission and featuring all the latest technological developments. As a result, it seeks to improve effectiveness and streamline operating expenses by reducing and modernizing the current fleet of helicopters, while also ensuring their sustainability over time.

The Spanish version of the NH90, the GSPA, has been designed to perform technical missions such as troop transport, search and rescue, personnel recovery and medical evacuation. It is equipped for day and night operations in all types of environments. Opened in 2007, the Airbus Helicopters plant in Albacete is responsible for the assembly of all NH90 helicopters for the Spanish Armed Forces, along with manufacture of the front fuselage section—both for Spanish helicopters and for those earmarked for export. It is also the only plant in the world to manufacture the rear fuselage of the Tiger helicopter, and the only Spanish facility with a helicopter-manufacturing capability.