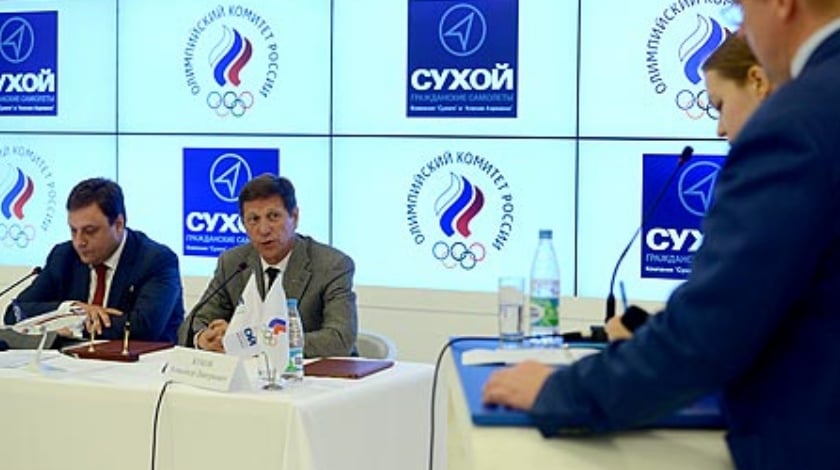 This partnership will enable SCAC to support the Olympic Movement and implement innovative joint projects.

The SportJet by Sukhoi concept as the first aircraft on the market with a specific interior design to suit professional sports teams, will be one of strategic areas of cooperation. The technology integrated in the aircraft cabin will be developed by SCAC and ROC Innovation Centre specialists in cooperation with athletes, medical experts and sports managers.

The Sportjet by Sukhoi will offer innovative medical and IT solutions for rest and recovery for athletes. The cabin will be divided into four functional zones: the recovery zone (physiotherapy equipment), the resting zone (comfortable setting for sleeping, biometrical data monitoring, built-in multimedia systems), the coaching zone (viewing and analyzing sports games) and the administration zone.

The SportJet by Sukhoi will be SCAC’s third product along with the Sukhoi SuperJet 100 and the Sukhoi BusinessJet, expanding the market and opportunities to promote the aircraft.

Alexander Zhukov, President of the Russian Olympic Committee:
“One of the Russian Olympic Committee’s priorities is to render every assistance in providing comfortable conditions for athletes to train in preparation for the Olympic Games. There will be another very important step in this direction as part of our partnership agreement. Essentially, thanks to our collaborative efforts there will appear a new niche on the Russian market that will provide great opportunities to develop an entire market segment. At the same time Russian teams will get a unique top service which will, no doubt, be conducive to achieving best results. However, this is not only about high-performance sports. Today’s agreement opens up additional possibilities for the Olympic Committee to implement our programmes for developing mass, amateur, and children’s sports and promoting a healthy life style”.

Ilya Tarasenko, President of Sukhoi Civil Aircraft Company:
“We consider our becoming a part of the big Olympic family strategically important. Collaboration with the Russian Olympic Committee gives us new opportunities to promote the Sukhoi Superjet brand and create a new best-in-class product: the SportJet by Sukhoi. Today, the market for air transportation for sports purposes is estimated at $600 mln. With the SportJet by Sukhoi we are planning to increase sales and generate demand for premium aircraft that provide unprecedented service for passengers”.