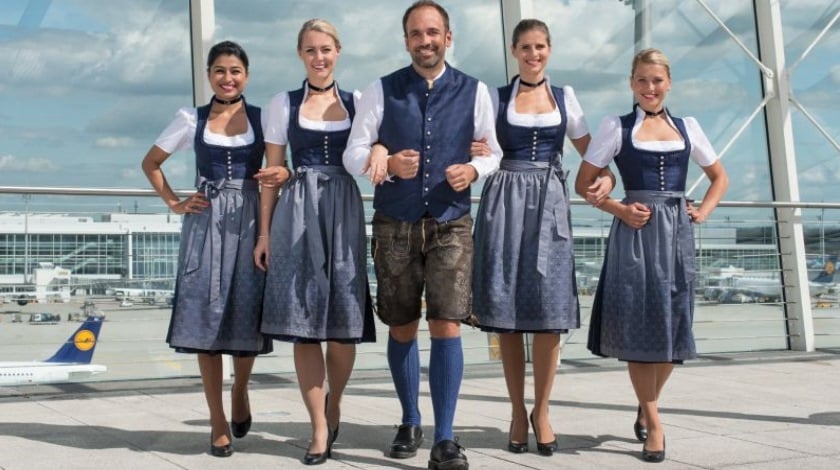 Lufthansa crew to wear anniversary costume to look after guests on its flights.

Ten years ago we heard it for the first time: Take-off for the Lufthansa crew in national costume. Since then, a total of 20 destinations have been flown to on four continents, with national costumes from three different fashion houses introduced to the passengers during this famous time of year for Bavaria. Two days before the beginning of the Munich Oktoberfest, Lufthansa passengers will once again get to experience Bavarian tradition up in the clouds.

On the occasion of the tenth anniversary, two crews will take-off in Angermaier costumes. Eleven flight stewardesses and two flight stewards will look after guests on flights from Munich to Toronto and from Munich to Washington. Further destinations will include Shanghai and Hong Kong on 20 September, Denver on 2 October and Boston on 3 October.

Over the past ten years, both the design of the costumes as well as the names of the designers have changed on a regular basis. However, the Lufthansa colours of yellow, blue and white have always stayed the same.

This year’s anniversary costume was designed and tailored by the Munich national costume specialists Angermaier, which is outfitting the crews to match the largest public festival in the world for the third time in a row. The Oktoberfest dirndl for the flight stewardesses is dark blue with a silver-grey pinafore. The men wear knee-length lederhosen with a dark blue waistcoat in the same fabric as the dirndls.

As in previous years, national costumes will be worn on flights to selected European destinations from Munich. At the beginning and the end of the Munich Oktoberfest, a crew from Lufthansa CityLine will swap their uniform for the dirndl. Destinations this year are Belgrade, Birmingham, Cluj, Nice, Olbia and Sylt.