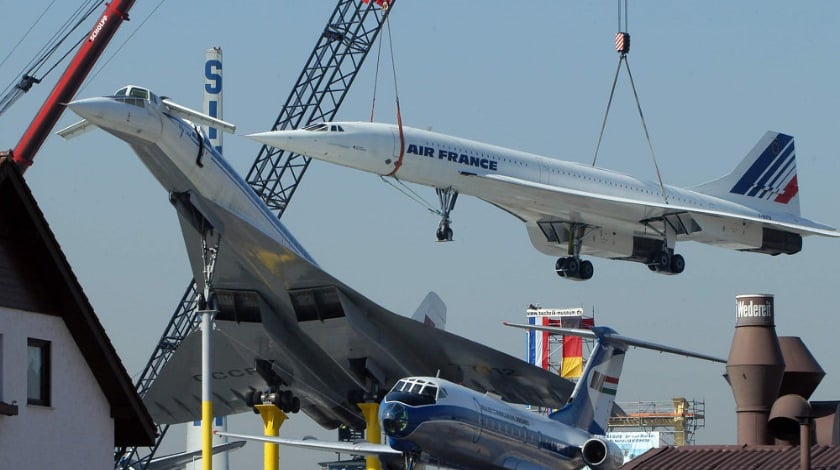 What is a supersonic aircraft?

It is the plane that can fly faster than the speed of sound (768 mph/ 1,236 km/h), in aviation called ‘Mach 1’. Assuming that, the flight is supersonic when aircraft is flying faster than Mach 1 speed.

Referring to the Federal Aviation Administration (FAA) approval, the fastest speed using ever known technology is considered to be Mach 2.2. This speed is used to create a new generation supersonic passenger jet named ‘Boom’.

Supersonic planes have always had very powerful engines. For example, the Concorde, one of the most popular supersonic jets, had four Rolls-Royce/ Snecma Olympus 593 turbojet engines. Each engine generated 18.7 tons of thrust, equivalent to 3,000 family saloons.

Together, the four engines burned an astonishing amount of fuel. To illustrate, while taxing the runway Concorde burned more fuel than the average car in six years.

The engines of a supersonic plane are attached directly to the underside of the wing without engine struts. This design reduces air turbulence and makes the engine more stable. Otherwise, during the supersonic speed engine struts would be overstressed and likely to break.

The second important reason that supersonic plane can fly so fast is the wings. A ‘delta-wing’ design technique is used for manufacturing the planes that fly faster than the speed of sound.

The plane looks like a triangle because of the ‘supersonic delta’ wings. These wings reduce the drag by being thin and swept back and provide the stability therefore no horizontal stabilizers are needed on the tail.

The weaknesses of these wings are that the plane must reach a much higher speed for a takeoff than other passenger planes. To illustrate, ‘Concord’s takeoff speed reaches 195 knots or 360 km/h (225 mph) compared to only 65 knots or 110km/h (75 mph) by Boeing 737.

Supersonic jets have an exclusive shape because of their needle-shaped nose. This nose is used for the reason to break the speed barrier of the sound and also reduces drag after the plane exceeds Mach 1.

Just before reaching the speed of sound the pressure of the air in front of the plane becomes extremely compressed. The needle-shaped nose helps to penetrate this barrier of compressed air, therefore, the plane can overstay the supersonic boom with less force obtained.

Concorde is the first one that comes to people’s minds when they think of supersonic airliner which first broke the sound barrier. However, that is barely true. Concorde wasn’t the first or the fastest commercial supersonic plane that flies faster than sound. All those honors go to the Tupolev TU-144, the supersonic passenger plane created in USSR.

The Tupolev TU-144 was produced in 1968 and had its first flight on the New Year’s Eve of the same year. Two months later the Concorde got off the ground.

The Tupolev TU-144 had four Kolesov RD-3651 turbojet engines. These engines are capable to reach a maximum cruising speed of Mach 2.29 (1,510 mph/ 2,430 km/h). This is the highest speed to be ever reached by commercial supersonic jet.

However, production of the TU-144 was canceled in 1983 due to the frequent failures. The first failure was made in 1973, when its first production model crashed at the Paris Airshow, killing all six crewmen and another eight civilians on the ground. The failures, which spanned from cabin noise to cabin depressurization, got so bad that the TU-144 manufacturing had to be stopped.

The plane was popular between businessmen because of its ability to fly from London to New York in less than three and a half hours reaching more than twice the speed of sound. More than 2.5 million people were flown during the period of 27 years.

Concorde has been developed in collaboration between British Aircraft Corporation and Aerospatiale. The first model was presented in 1969, but its official flight was performed only in 1976.

Only 20 aircraft were made during the time, and only 14 of them were used in airline industry. The low number of such planes was produced due to its high price as the plane cost £23 million in 1977, which is equal to £107 million in today`s economy.

The Concorde’s flying history was accident-free until July 5th in 2000, when the plane operated by Air France hit large metal debris while speeding on the runway and broke the fuel tank causing a massive fire. The plane crashed into the airport hotel. After this accident FAA made changes in the maintenance of the plane, which increased the costs, therefore, there was no further intention to keep this unprofitable plane operating.  It took only a single crash to ground the most advanced plane of those times.

The new supersonic speed plane has been named Boom. This plane is being developed as a replacement for famous Concorde. The Boom creators are now saying that this plane will be using modern engines and materials that will allow it to fly much faster than its predecessor Concorde. The Boom plane is supposed to be able to reach 1,451 mph (2,335 km/h) speed.

The Boom is being developed by a startup company Boom Technology, Inc. The company is representing the team that consists of pilots, engineers, and hands-on builders. They all collaborate in creating the design of the plane which could withstand flight speed up to Mach 3. The team is challenged to create routine supersonic flights for everyone.

This dream can become a reality because the approximate ticket price for this type of a flight is very low. The ticket cost for the flight from London to New York is calculated to reach around $5,000 (€4,500) which is mostly equal to the price of business class ticket in Boeing 777. Moreover, the fly with the Boom would take about 3 hours and 24 minutes. Thirteen years ago the trip across the Atlantic by Concorde could afford only wealthy people because the cost was as high as $12,000 (€10,700) for a regular flight from London to New York.

The Boom will be made from carbon composites which can withstand higher temperatures than the aluminum used for Concorde. Also, it is cheaper and lighter than titanium which is used in military jets.

The manufacturer of Boom jet believes that the plane will be about 30 percent more efficient compared to Concorde. The efficiency will be reached by using carbon composites and more advanced engines.

The company promises to represent the prototype which is planned to be ready for the first flight in 2017. The Boom supersonic testing will be conducted at Edwards Air Force Base in California.

It looks like supersonic flights will be frequent in the future

Boom Technology Company had announced that they signed the contract with Richard Branson’s Virgin Group for the ten planes which amounted up to $2 billion dollars.

This is not the only one billions worth agreement for Boom manufacturers.  If the manufacturer of Boom provides successfully working planes, another agreement for 15 additional planes will be signed with one of the European carriers for the total amount worth up to $5 billion.

Major investors such as Virgin Group, Bloomberg and other make it believe that the Boom project will come true. The most advance technologies and all the knowledge put together to develop this plane should make the future supersonic flights available for more of us.