The Most Deadly Plane Crashes In Aviation History 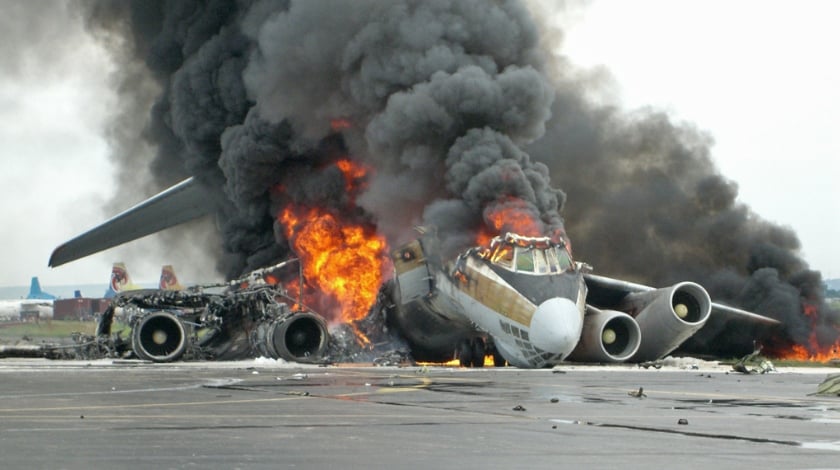 Probably you will admit that today air travel has become affordable for almost everyone and the aircraft manufacturers are doing everything to meet the growing demand and make our flights as safe as possible.

Unfortunately, since the first flight in 1903, the history of air travel has counted more than 1000 deadly accidents. Even taking into consideration the fact that air travel is the safest type of transportation, aircraft accidents still occur and usually have fatal endings. The most deadly plane crash in the history of aviation claimed the lives of almost 600 people.

Overview of the well-known plane crashes

It is well-known fact that an airplane is a huge combination of different modern aviation systems and unbelievably powerful engines, however, it still cannot take off or land without a pilot on board. Sometimes even a small mistake made while operating an airliner can lead to catastrophic consequences. Therefore, human factors were the main causes in more than 93% of all the aviation accidents. This time we reveal the deadliest plane crashes in aviation history.

On 19th February 2003 an Iranian Air Force plane carrying Revolutionary Guards on an unknown mission crashed into an 11,500 ft. mountain in poor weather near Kerman leaving no survivors.

During the Iraq-Iran war in the summer of 1988, on July 3, due to misunderstanding in communication, the USS Vincennes, which was located in the Persian Gulf at that moment, shot down the Iran Air Airbus A300, going from Dubai to Tehran, by surface-to-air missile.

The United States did not admit their mistake and even did not give an apology to the families of 290 passengers who were on board. However, the US government paid them nearly 62 million dollars compensation.

In August 1980, Saudi’s Lockheed L-1011, heading towards Jeddah, made a stop in Riyadh. Shortly after take-off, in around 7 minutes, the fire in the cargo hold broke out. The pilots decided to return. They turned the plane around and made an emergency landing. Unfortunately, everyone on board died of smoke inhalation before firefighters got inside.

According to some sources, fire started due to butane stoves used by Muslim pilgrims because of their strict dietary restrictions. Since this fatal accident Saudi Arabia has banned the stoves but some people still smuggle them on board to make tea.

On 23 June of 1985 a bomb exploded at an altitude of 31,000 feet (9,400 m) on board of the Boeing 747 as it was flying from Montreal to London. The plane crashed into the Atlantic Ocean just off the coast of Ireland. It was the first bombing of a 747 jumbo jet and the largest mass murder in Canadian history. It was the deadliest terrorist attack involving an aeroplane until the September 11 attacks.

In 1974, the Turkish Airlines Flight 981 was flying from Istanbul to London with an intermediate stop in Paris; however, the McDonnell Douglas DC-10 did not reach its destination and crashed into the Ermenoville forest outside Paris. All 346 people on board died.

The cause of the tragedy was decompression which occurred because of a Moroccan baggage handler who was unable to read the proper latching instructions in English. The latch blew off in mid-flight and damaged control systems.

349 victims – this is the fatal outcome of a mid-air collision of the Saudi Arabian Boeing 747 and the Kazakhstan Airlines IL-76. The crash occurred just 60 kilometers from Delhi. The Kazakh airliner changed the altitude from 15,000 to 14,000 feet without permission. As a result, it rammed the left wing of the Boeing 747.

An investigation found that the primary cause of the accident was the Kazakh pilots’ poor knowledge of English.

On August 12, 1985, after 12 minutes of flight the Japan Airlines’ Boeing 747 suffered an explosive decompression and 32 minutes later crashed 100 kilometers from Tokyo leaving only 4 survivors and 520 dead.

The explosive decompression was caused by a faulty repair performed by Boeing after a tailstrike incident during landing seven years earlier. It is the deadliest single-aircraft accident in history, the deadliest aviation accident in Japan and the second-deadliest Boeing 747 accident.

The most terrible, unexpected and even absurd plane crash took place in 1977 at the airport in Tenerife. Nearly 600 people lost their lives in the result of the collision of two large airliners during take-off. The tragic story involves two Boeing 747s belonging to the Dutch KLM and the American Pan Am airline.

Both planes were in Tenerife by the accident, since they were redirected due to the terrorist attack that happened the day before in Gran Canaria.

Boeings moved on taxiway towards each other and did not have time to turn the plane and avoid the collision.

According to the official statement, investigations revealed that the primary cause of the accident was the captain of the KLM airliner as long as he decided to take off without clearance from the air traffic controllers. However, the investigation specified that the captain did not take off without clearance; on the contrary, he was totally sure he had clearance to take off due to misunderstandings between his flight crew and ATC.

In terms of passengers and crew killed in this collision between two Boeing 747s on the Spanish Island Tenerife is considered to be the deadliest plane crash in history.