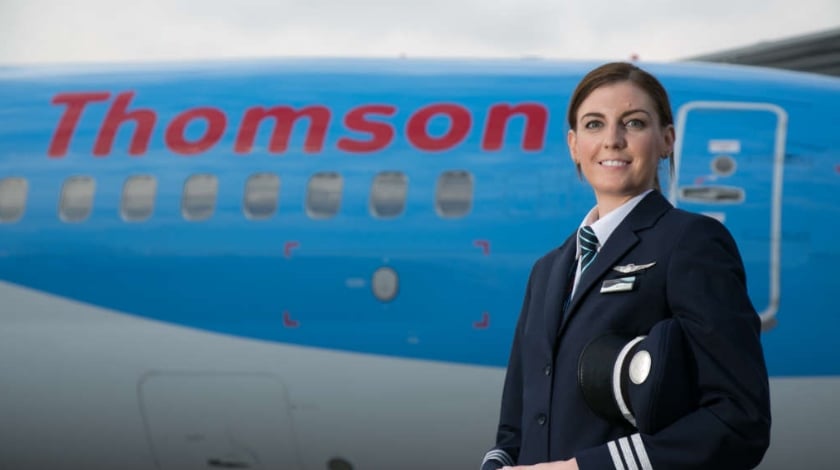 Rachel Barrett, 28 from Liverpool, fell in love with flying at a young age – but never believed it would become her career. The former travel agent, who works for Luton-based Thomson Airways, has been a First Officer with the airline for three years.

“On a whim I decided to book a flying lesson at Liverpool airport and became hooked – so I signed up to a course to gain my professional pilot’s licence.”

Having caught the flying bug, the aspiring pilot became a frequent flyer taking to the skies most evenings and weekends to build up her flying hours, becoming fully qualified in 2012.

However, it wasn’t until she joined Thomson as a retail assistant in the Liverpool store four years ago that she met with the opportunity to become a pilot with Thomson Airways.

“My colleague spotted an internal recruitment notice for newly qualified pilots to join the airline on the cadet training scheme to fly the Boeing 737. I applied and was invited to an assessment day, eventually making it down to the final stages.”

Two weeks after her final assessment Rachel received the phone call telling her she’d got the job – “I was over-the-moon!”

Having joined Thomson Airways in 2014, Rachel is now based at Manchester airport and has currently clocked up 2,500 hours flying the airline’s 737 series. This autumn she will be training to fly the airline’s new state of the art Boeing 787-9 Dreamliner which will travel to far flung destinations such as Jamaica, Dominican Republic and Mexico.

Thomson Airways employs nearly 900 pilots, but just 3% are women, something which the airline is keen to change, with its latest pilot recruitment drive.

Caroline Kitcher, HR Director at TUI UK & Ireland, said: “For our customers, their holiday begins the moment they step foot on the plane – so our pilots play a huge part in their journey.

“We’re looking for pilots with the aptitude, passion and dedication to going the extra smile for our customers – it’s a career that is achievable for everyone.”

Rachel added that she would encourage more young women to consider a career as a pilot.

“To be able to travel to different destinations every day is a dream come true. Combined with the development opportunities, I really couldn’t recommend it highly enough. As long as you have the dream, and dedication, anyone can become a pilot – the sky’s the limit!”

TUI UK and Ireland, the parent company of Thomson Airways, recently announced it will deliver more than 2,000 new apprentices by 2020, including news of an industry-first pledge – to develop an all-new apprenticeship scheme to become a pilot. Working in collaboration with the Industry Skills Board, the new scheme will see changes to the funding system, making becoming a pilot a more accessible career option for many.