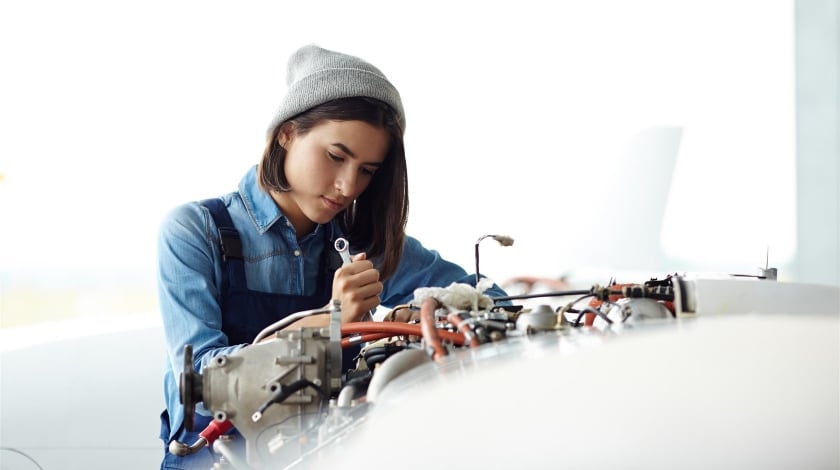 Every day we see the aircraft flying, making thousands of flight hours and transferring millions of passengers worldwide. However, despite seeing all of them in the sky, there are hundreds of aircraft on the ground, having routine checks or special maintenance projects. Due to extremely strict safety and airworthiness regulations, all of the aviation companies has to provide the best service their aircraft can get and as soon as possible.

The keyword here – as soon as possible. Keeping an aircraft on the ground is without doubt a very luxurious decision.

The longer it is not in the air, the more money airlines are burning.

Since most of the aircraft maintenance projects involves having several parts to be changed. That is why aircraft spare parts market is so overflown with requests. The faster maintenance company gets the needed parts, the better.

Most popular – wheels and brakes

An aviation IT company Locatory.com, primarily acting as an aircraft parts locator, looked back at 2018 and which spare parts where in the highest demand among the buyers and sellers. The company listed out top 15 spare parts that were bought the most throughout the last year. Looking over them, it seems that most of the top parts were requested for the most common maintenance operations. The parts that are being changed most are wheels and brakes and so, the top 15 consists of almost half of these exact things. Looking at these exact wheels and brakes parts and their numbers, it is visible, that most of them belong to the most popular aircraft that is being operational at this time – Boeing 737 CL, Boeing 737 NG and Airbus A320 family.

Only one of these parts, the wheel that part number is 3-1456, belongs to an Airbus A330. It is hard to say why exactly this part is so popular except for the fact that wheels are being changed quite often. The only interesting thing about this is the popularity of an aircraft in comparison with its more popular member of Airbus fleet worldwide. According to Airbus Orders and Deliveries information on 28th of February 2019, there are only 1441 operational A330s worldwide in comparison with 8734 A320 family aircraft.

Aircraft windows – issue that is more than common?

The other category of spare parts that are on a top 15 list – windows and their frames. It seems that the windows of an aircraft, being so small, should be extremely durable. And, for any passenger, it seems that especially this part of an aircraft, is not a place where cracks or malfunctions should or could happen. However, the numbers says otherwise. According to Locatory.com data, the windows and windshield assy is among top 15 spare parts searched in the platform.

“Windows are one of the most maintained or changed aircraft parts besides wheels and brakes.

These kind of maintenance projects are happening quite often. There are several reasons behind that but the most popular one is the malfunction of a heating system that is installed in the frame. If there are any wiring problems, they have to be changed with the windows too. These things are not separated and has to be changed together. The other reason is mostly environmental. Some happen due to the sudden changes in the temperature when aircraft takes of from ground to the skies. The others – because of the changes in the pressure. The crack in the windshield can appear any time and we have to change it very fast,” says Ovidijus Jonas Stalnionis, Head of Sales Division for Russia & CIS at MRO company FL Technics.

Changes in SB and AD raises the need of specific components?

Besides the actual changeable parts that are being used in a process of flying, there are some components that are on a list. For example, box relay, aural warning module assy, or bleed valve, had to be implemented in accordance to the new Service Bulletin (SB) and Airworthiness Directive (AD). It is obvious, that safety is the highest measure in aviation and due to changing laws and directives there has to be some changes made in all the aircraft that are operational. And that is the main reason of these spare parts that climbs to the top of the aircraft spare parts list of 2018.

What will the future show?

At this moment it is really hard to tell, what other spare parts will be needed in the near future. However, the parts themselves are one thing. The other – is the speed and the time spent for receiving them. “We understand the market and know how crucial it is for airlines or MRO companies to receive some spare parts as soon as possible. Our company does everything we can, we find new IT solutions or create new services so that our clients would spend less time and money and would get the service as soon as possible. I believe, that our know-how, vast experience in the market and being in a worldwide aviation group gives us an upper hand in delivering the best solutions and services to the market players,” says Dainius Meilunas, CEO at Locatory.com. According to him, no matter how the top of the list of spare parts will change in 2019 or further on, the company will always find the way to help their clients in the fastest manner possible.
You can find the full list of TOP 15 spare parts below.