Trigana Air’s Boeing 737 Skidded Off The Runway in Jayawijaya 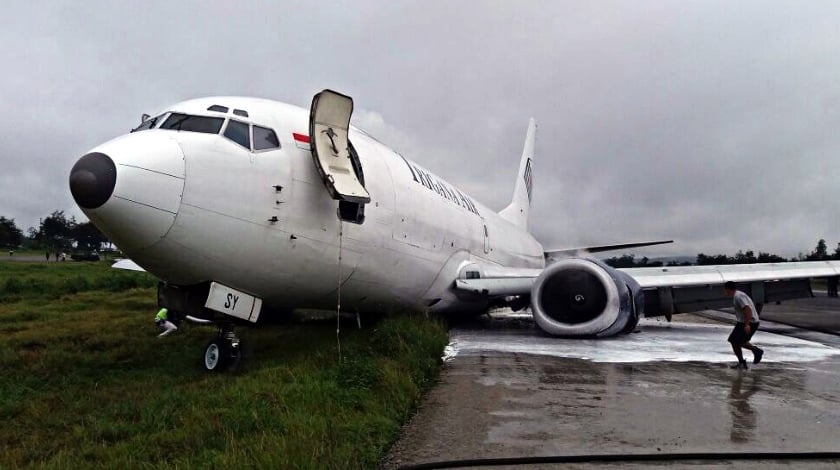 Authorities have closed Wamena Airport in Jayawijaya, Papua, after a cargo aircraft belonging to airline company PT Trigana Air Service skidded off the runway on Tuesday.

According to reports, the Trigana Air service plane skidded off the runway at 7:30 a.m. local time as it attempted to land. Sparks of fire reportedly emanated from areas near the back wheels of the aircraft.

“The airport will remain closed because the aircraft is still on the runway. It will be removed from the location only after an initial technical investigation is conducted by a National Transportation Safety Commission [KNKT] team to reveal the causes of the landing failures is finished,” Wamena Airport head Rasburhani told The Jakarta Post on Tuesday.

The cargo plane carrying 14,913 tons of fuel departed from Sentani Airport in Jayapura. The aircraft was piloted by Capt. Jatmiko and co-pilot Joshua, with a technician identified only as Iwan on board. Fortunately, no one was injured in the incident.

Rasburhani said several flights had been cancelled due to the airport’s closure. “There are between 150-160 flights at Wamena Airport every day. The closure has caused many flight cancellations,” he said.

PT Trigana’s Papua area manager, Bustomi Eka Prayitno, said the back wheels of the aircraft had not extended into position when it was about to land, causing it to skid off the runway. The airplane’s engine was severely damaged, with the engine cover detaching from its position. The plane’s left wheel was also broken.

“We will know why it happened only after we have the results of the investigation from the KNKT team,” said Bustomi.