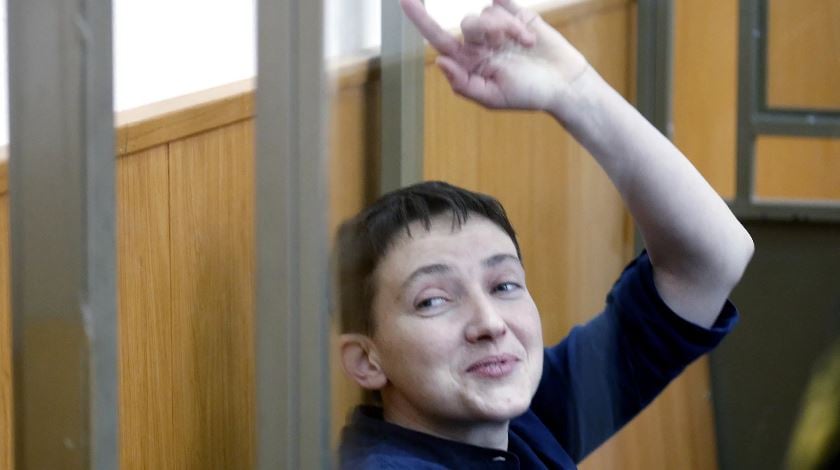 A court in southern Russia has sentenced Ukrainian pilot Nadiya Savchenko to 22 years in prison, bringing to a close a controversial court case that is likely to further inflame the difficult relations between Moscow and Kiev.

Savchenko was found guilty of complicity in the murder of Anton Voloshin and Igor Kornelyuk, two journalists working for Russian state television who died in an artillery strike during the conflict in east Ukraine in June 2014.

She has consistently denied the charges, and the trial has been dismissed in Ukraine and internationally as politically motivated.

As the judge announced the guilty verdict, Savchenko broke into song, forcing him to call a recess before the sentencing was announced. The court reconvened shortly after to hear the announcement of a 22-year sentence, just a year less than prosecutors had demanded.

When the judge finished the sentencing, Savchenko shouted abuse at the judge in Ukrainian before launching into a rendition of the Ukrainian national anthem.

Savchenko was a helicopter pilot who had left the air force to fight with the Aidar volunteer battalion in east Ukraine at the time of her arrest. Prosecutors said she was responsible for directing artillery fire in an attack that killed two Russian TV journalists. The court refused to admit evidence of her phone calls that the defence team claimed would show she was not in the area at the time of the attack.

Savchenko was also fined 30,000 roubles (about £300) for illegally crossing the Russian border. She claims she was captured by pro-Russia separatists in eastern Ukraine and brought across the border against her will.

International condemnation of the verdict came quickly. “Simply put, Savchenko did not get a fair trial, and so her conviction is unsound and should not stand,” said Hugh Williamson, Europe and Central Asia director at Human Rights Watch.

“There should be justice for the deaths of Kornelyuk and Voloshin, but justice won’t be served by an unfair trial that was highly politicised from the start.”

Savchenko’s team of lawyers had said ever since the start of the trial that they had little hope of a not guilty verdict due to the politicised nature of the Russian legal system and the high profile of the case.

Their main hope is that after sentencing Savchenko could be made part of an exchange deal between Russia and Ukraine, possibly for two Russian soldiers who were captured in eastern Ukraine and are on trial in Kiev.

Savchenko’s lawyer, Nikolai Polozov, said outside the courtroom that she has decided not to appeal against the verdict because she realises it is “completely pointless” to do so.

“Now we have to concentrate on increasing political pressure on the Russian leadership, and this will lead to her release. There is no other option, as you have all seen that there is no real justice system.”

The judge took two days to read out the verdict, in a monotonous marathon frequently interrupted by laughter or shouts from those assembled.
Savchenko paced the glass defendant’s enclosure, smiling ironically and occasionally shouting out interjections as the judge read through the reams of paper summarising the case. As she has for most of the trial, she wore a T-shirt emblazoned with a Ukrainian trident symbol.

At one point, when the audience in court began laughing at part of the judgment, the judge said: “Anyone who finds this funny will be expelled from the courtroom now.” Savchenko called out: “I find it funny!”

Her trio of lawyers spent most of the day looking at their mobile phones; one of them read a magazine. The room was guarded by bailiffs in balaclavas and was packed with journalists, diplomats and a delegation of Ukrainian politicians, including the press secretary of Ukraine’s president, Petro Poroshenko, who had travelled to the Russian border town of Donetsk to hear the verdict.

Savchenko has become a national hero in Ukraine, and during her time in prison has been made an MP and elected to the parliamentary assembly of the Council of Europe.

The trial has been running since last September. Savchenko went on an 83-day hunger strike while in prison awaiting trial. During her final statement to the court, a defiant Savchenko railed against the Russian justice and political system and raised her middle finger at the judge.

“It was a theatre with one actor, where the judge just read out the verdict that had been written for him from above,” said Ukrainian MP Alex Ryabchyn, who was at the court hearing.

“They rejected literally all the evidence from the defence. In the end it doesn’t matter how many years she was sentenced to. We must work to have her freed now, and she has already gone down in the history books.”

In a statement, the Ukrainian president, Petro Poroshenko, compared the trial to the court system of the Stalin era, and said Ukraine would never accept its validity.

“The time has come to talk about an exchange,” wrote Poroshenko, saying he was ready to send two Russian officers captured in east Ukraine and currently on trial in Kiev back to Russia.

He did not specify whether he was offering the exchange only for Savchenko, or whether it should include other Ukrainians jailed on apparently politicised charges in Russia, such as the Crimean film director Oleg Sentsov.