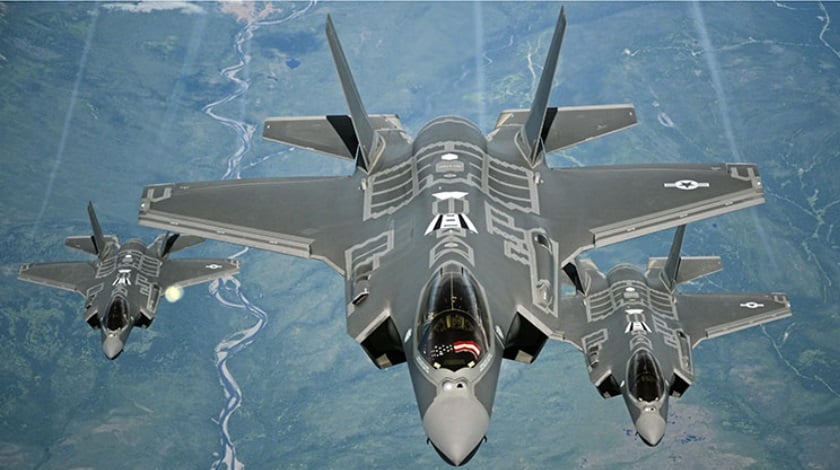 The F-35A’s achievement of IOC – initial operational capability – was announced by General Hawk Carlisle, the commander of Air Combat Command, on August 2.

“I am proud to announce this powerful new weapons system has achieved initial combat capability,” General Carlisle said in a statement.

“The F-35A will be the most dominant aircraft in our inventory, because it can go where our legacy aircraft cannot and provide the capabilities our commanders need on the modern battlefield.”

Requirements for USAF IOC with the F-35A included an operational squadron of 12 to 24 aircraft with sufficient trained aircrew and maintenance personnel, logistics and support arrangements in place, and the ability to conduct basic close air support, interdiction and limited suppression of enemy air defence missions. That first operational squadron, the 388th Fighter Wing’s 34th Fighter Squadron, based at Hill Air Force Base, Utah completed all the USAF’s criteria for F-35A IOC including an away from home base deployment – to Mountain Home AFB, Idaho in June – and a series of eight-ship sorties, which were conducted in mid-July.

The US Air Force plans to field 1,763 F-35As, the conventional takeoff and landing variant of the Joint Strike Fighter, which Australia has committed to acquire 72 of. F-35A IOC follows US Marine Corps IOC with the STOVL F-35B achieved in mid-2015, while US Navy IOC with the carrier-based F-35C is planned for the second half of 2018. Australia, meanwhile, plans IOC with its first squadron of F-35As in 2021.

“The F-35 links the Air Force, Navy, Marines and our allies together as a strong, interoperable, warfighting coalition,” head of the F-35 Joint Program Officer, Lt Gen Chris Bogdan said.

“Last year the F-35 Joint Program Office and our industry partners worked hand-in-hand with the US Marine Corps to achieve their IOC goal at the beginning of their six-month window and we’ve done it again with the US Air Force. The roads leading to IOC for both services were not easy and these accomplishments are tangible testaments to the positive change happening in the F-35 program.”

As with the F-35B, the F-35A’s IOC meet the schedule determined by the US Department of Defense for IOC announced in May 2013, but major milestones still remain before the aircraft is capable of its full spectrum of missions, in particular the completion of the aircraft’s Block 3F software, planned for 2017, while development of a mature of version of the troubled Autonomic Logistics Information System – ALIS – maintenance management software is not due for release until late this year.

“We know that we will continue to add capability to this airplane just like we have with every airplane in the history of the Air Force,” Gen Carlisle told media in an August 2 briefing to announce IOC. “Some of the software is significantly improved, but there’s still things we are going to work on.”

But that won’t necessarily deter the USAF from deploying the aircraft sooner rather than later.

“I would like to deploy it to both the European and the Pacific theatre in the not-too-distant future, so I would say within 18 months I think I’ll try to get to both those theatres,” Gen Carlisle said.

“I think when the F-35 deploys to places like in the European theatre as well as in the Pacific theatre, it will give our allies and partners confidence in the airframe.

“It will also give them a chance to see it in operation and see it in interoperability working with their fourth-generation airplanes.”