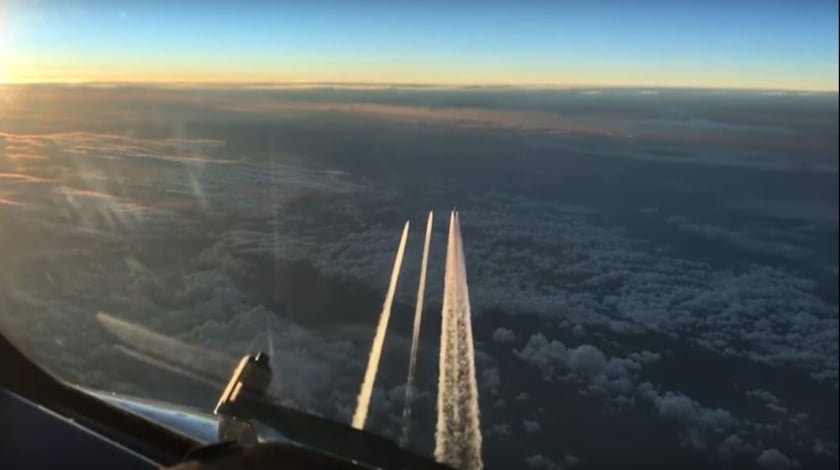 When passenger aircraft go unresponsive and they don’t communicate with air traffic controllers, especially in the wake of the 9/11 attacks in the United States, defense officials get worried, and understandably so.

The typical response is usually a pair of fighter aircraft, armed with a light air-to-air combat payload. In this video, you’ll get to see one such intercept performed by a pair of Eurofighter Typhoons of the Luftwaffe (German Air Force) on a Jet Airways Boeing 777-300ER over Cologne, Germany.

On February 16th, just a few days ago, a Jet Airways flight 9W118 from Mumbai, India to London, England failed to communicate with German air traffic controllers while flying through German airspace at 36,000 feet (FL360). After controllers failed to hail the aircraft, a pair of Luftwaffe Eurofighter Typhoons on quick reaction alert duty were scrambled and vectored towards the uncommunicative passenger flight. The video above, was actually taken by the first officer aboard a British Airways flight from the Maldives to London (BA2042- another Boeing 777).

In it, you’ll see one Typhoon hustling to catch up with the Jet Airways flight, coming just near its left wing. When the lead Typhoon reaches the quiet flight, it hangs just forward of the left wing, in clear sight of the captain’s side of the airliner’s cockpit.

The second Typhoon in the intercept flight hangs back in typical form. In a military-on-military intercept, the second fighter in the flight would usually remain to the rear of the lead so as to keep the option of engaging the unidentified (and possibly hostile) aircraft with missiles open.

According to The Aviation Herald, the Jet Airways pilots switched to the emergency frequency and established contact with German controllers, much to everyone’s relief. The flight then proceeded to London Heathrow International Airport (LHR) without any further incident. Jet Airways released a statement saying that the two pilots involved in the incident have been removed from the active flight roster, meaning that they’ll be unable to fly, until the company and Indian civil aviation authority investigation is over.